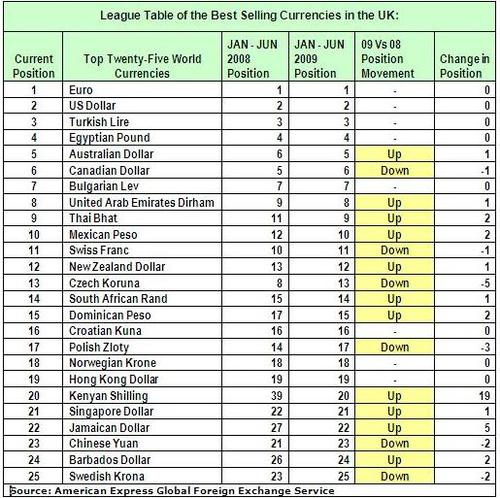 Despite the current economic climate, UK demand for currencies to exotic long-haul destinations such as Thailand and Barbados have increased

British holidaymakers are turning their backs on previously ‘in-vogue’ European mini breaks in favour of a single, ‘premium’ 2009 annual holiday destination, according to the first ever American Express Global Foreign Exchange Service Currency Index. Despite the current economic climate, UK demand for currencies to exotic long-haul destinations such as Thailand and Barbados have increased year on year, whilst at the same time there has been a big decline in demand for currencies linked to European mini-break destinations.

Terry Perrin, Director of Trading & Business Development at American Express Global Foreign Exchange Services explains: “We have seen a significant decline in demand for currencies linked to destinations such as Prague (Czech Republic Koruna) and Krakow (Polish Zloty). Also reflecting the trend is the fall of the Hungarian Forint for destinations such as Budapest - since this time last year the Forint has dropped a huge seven places and out of our ‘Top Twenty-Five World Currencies’ league table.

“The uplift in currencies for long haul destinations and the demise of the ‘mini-break’ currencies suggest that whilst many Brits are opting for more premium holiday destinations, they are in fact reigning in their overall annual spend and forgoing mini-breaks in order to ‘push the boat out’ for their main annual holiday.”

Even the outbreak of swine flu earlier this year, seems to have done little to dampen British holidaymaker’s quest for long haul value for money holiday destinations. Mexico is well renowned for its all-inclusive and value-for-money resorts and the Mexican Peso has increased in popularity year on year; making their way up the American Express currency league table by two places since last year.

Perrin continues: “Despite the outbreak of swine flu, we have still seen a considerable increase in demand for the Mexican Peso. Whilst demand initially dipped, causing the Peso to drop by eight places in May, overall figures suggest that swine flu was merely a short lived deterrent for travellers.”

In fact, fifteen out of the twenty-five most popular currencies in 2009 are for long-haul destinations proving that holiday makers are prepared to go the extra mile if they can get value for money.”

Another popular long-haul destination is Jamaica; since 2008 the Jamaican Dollar has risen five places in the American Express league table. Many holidaymakers are being enticed to the Caribbean by the abundance of two for one deals offered by many premium travel operators.

Whilst not yet in the top twenty-five, the Kenyan Shilling has risen a huge 19 places since 2008, from number 39, likely a result of increased consumer confidence in the region’s safety.

Top destinations outside the Eurozone but close to home

The Turkish Lire is now the most popular currency following the Euro and Dollar. Egypt is also proving to be a popular hotspot outside the Eurozone, and has firmly established itself as an all year round, value-for-money holiday destination.

“Over the last few years American Express has seen a year on year increase in demand for both the Turkish Lire and the Egyptian Pound,” says Perrin. “This year their popularity has been further bolstered by the weaker sterling-to-euro exchange rate, as UK travellers specifically look outside the Eurozone to make their spending money go further. In just twelve months we have seen demand for the Egyptian Pound nearly double and demand for the Turkish Lire increase by more than a third, both of which are at the direct expense of the Euro”.