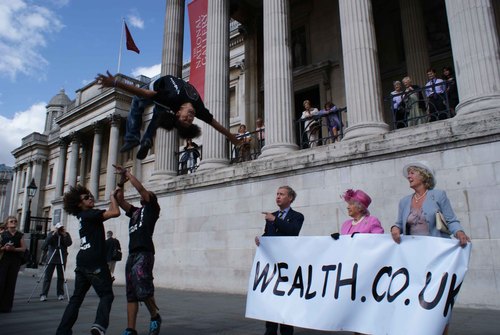 PM/Tuesday 1st September 2009/London - Hundreds of tourists in Trafalgar Square and outside Buckingham Palace couldn’t believe their luck today when some ‘Royals’ appeared to congratulate author, Ron G Holland, on the launch of his latest book, The Eureka! Enigma - 7 Keys to Realizing Your Dreams. (Morgan James NY).

Tourists from Japan, France, Germany and elsewhere from around the world rushed to be photographed with the ‘Queen, Prince Charles and Camilla’ - apparently in recognition for the work that Ron did a few years ago for The Prince’s Trust by way of his motivational speaking and mentoring.

The ‘Royal trio’ delighted in shaking hands with the some of the crowd. One American tourist from Boise, Idaho, in the US commented: “We were really taken in until a Brit told us it was just an elaborate book launch!”

Holland, (60), a serial entrepreneur and best-selling self-help author is also campaigning to raise a million dollars sponsorship for his own motorcycle land speed world record attempt. This currently stands at some 360 mph and is held by his hero, American Rocky Robinson, who is giving Ron advice. The Eureka! Enigma is all about turning ideas into reality and today’s stunt was another of Ron’s creative ideas turned into reality. The Eureka! Enigma - 7 keys to realizing your dreams is available at www.wealth.co.uk.