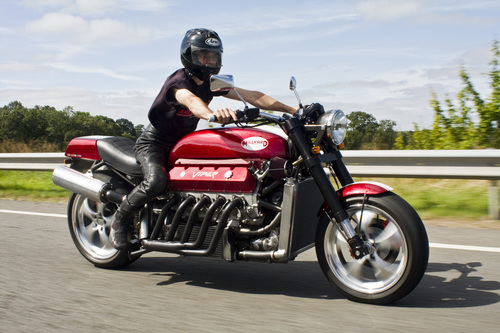 The world’s fastest production motorcycle was hand-built over two years by the Berkshire-based mechanical engineer. With a mighty eight litre Dodger Viper V10 engine at its heart it produces a fearsome 500 bhp and 525ftlb of torque. Now Millyard who created the bike without drawings, computers or help, has plans to break the world land speed record, saying: “The mass for the power I’ve got, and the aerodynamics, put the theoretical maximum speed at 280mph but my tyres would restrict that. The world land speed record for an unfaired motorcycle is 252mph on Bonneville Salt Flats. We’re going to try and beat that next spring, in the UK, at Bruntingthorpe Proving Ground.”

The bike has already proven its mettle with a professional speed tester taking it to 207 mph at Bruntingthorpe last month. “He said he’d never been on a bike with that acceleration and he couldn’t even give it full throttle. It was pulling about 2 G of force. We looked at the acceleration curve and it was straight!” reports Millyard who says he himself took the bike up to 195mph.” Travelling at a more sedate pace he has notched up to 1,000 road miles on the traffic stopper.

Weighing in at over 630kg and nine-foot long the bike is nonetheless impressively stable. “It weighs half a ton but it’s built in proportion,” explains Allen. “It’s got massive 20” wheels with a 280 tyre on the back and a 190 on the front so it’s well balanced.” The Viper is also fully road legal having secured Department of Transport Motorcycle Single Vehicle Approval at the first time of asking, paving the way for it to go into production. “I want to build a pre-production prototype and get some drawings done. So far everything’s been done from images in my head and built from what I had around and could afford. When that’s done I can see very limited production of maybe ten bikes, handmade to individual specifications.”

Appearance at the Carole Nash International Motorcycle Show will place the Viper firmly in the shop window. “It’s the ultimate bike show and the Carole Nash stand is the most prestigious,” says Allen.

Editor’s Note:
1. Carole Nash, lead sponsor of the International Motorcycle Show, employs over 300 staff and is the UK and Ireland’s biggest motorcycle insurance specialist. It provides insurance for some 300,000 classic, vintage, modern, custom and off road motorcycles – around 20 percent of all licensed machines. It has been voted Most Used Broker by bikers polled for the independent RiDER Power survey conducted by Ride magazine in 2002, 2003, 2004, 2006, 2007, 2008 and 2009.

2. Allen Millyard lives in Thatcham, Berkshire and has been building motorcycles since he was 15. He is a qualified mechanical engineer who has built over 30 multi-cylinder machines. He hand-built all of the Viper V10 with the exception of the chrome and paintwork. Please direct pre-show interview requests to pressoffice@carolenash.com