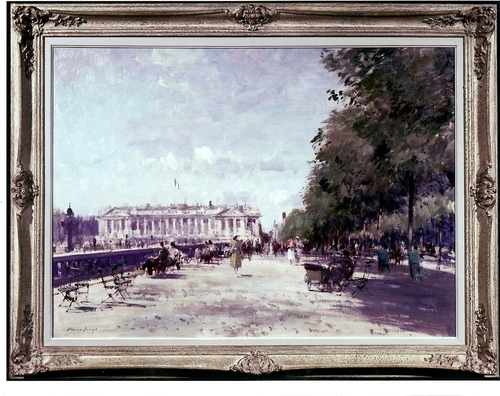 EDWARD SEAGO CENTENNIAL EXHIBITION - A Major Selling Show - “A HUNDRED YEARS OF EDWARD SEAGO AT HOME AND ABROAD” - Presented by THE TAYLOR GALLERY, LONDON - To be held at 28 Cork Street, London W1S 3NG - From Monday 15th to Saturday 20th February 2010

To mark the centenary of the artist EDWARD SEAGO (1910 – 1974), THE TAYLOR GALLERY LTD., which specialises in his works, is organizing a major selling exhibition of paintings and watercolours by the artist entitled “A HUNDRED YEARS OF EDWARD SEAGO AT HOME AND ABROAD.”

This selling exhibition consists of over 60 watercolours and oil paintings spanning Edward Seago’s broad career and is inspired by his extensive travels. It will be held at The Gallery in Cork Street, 28 Cork Street, London W1S 3NG from Monday 15th to Saturday 20th February 2010. It will include a large selection of works not seen in public for 30 to 40 years.

Highlights include such masterpieces as ‘The Gulf of Porto Cervo, Sardinia’, ‘Hyde Park in Winter’, ‘Summer in the Tuileries Gardens’. An outstanding watercolour of Seago’s East Anglian work is ‘The Elm Tree’, together with the oil ‘The Butt and Oyster, Pinmill, Suffolk’, which was one of Seago’s favourite East Anglian subjects. ‘The Harbour, Dieppe’, ‘Place de la Concorde, Paris’, and ‘The Beach at Torremolinos’, showcase his technique of capturing a moment in time.

The almost entirely self-taught and yet very successful artist Edward Seago worked within the long tradition of British landscape painting and is heir to such artists as Crome, Cotman and Constable, all of whom were born, like Seago, in East Anglia. He was certainly amongst the very best of British landscape artists of the Twentieth Century.

Through his contact with the great and the good, including Winston Churchill and King George VI, made whilst working as an unofficial war artist attached to General Alexander’s staff during the Italian Campaign in The Second World War, Seago obtained several important commissions, including two of King George VI followed by one of his wife Queen Elizabeth. From then on, his fortunes flourished. From 1946 to 1966 he had annual exhibitions at Colnaghi’s gallery in Old Bond Street in London, which were so successful that potential buyers, some of whom had queued all night, were restricted to one picture each! Everything sold within the first half hour!!

As a result of his financial success, Seago was able to indulge in his passion for travel. He regularly visited Europe. He went to Antarctica on a painting expedition with Prince Philip on the Royal Yacht Britannia, stopping in Singapore for a week on the way. In 1962 he spent three months in Hong Kong during which time he produced approximately eighty works which are now keenly sought after.

He loved the bright sunlight around the Mediterranean visiting Greece, Turkey and Morocco painting all the time. In the early 1970s he sold his yacht ‘Capricorn’ and purchased a flat in Sardinia and produced stunning views of his surroundings there.

This exhibition marking the centennial of Seago’s birth, illustrates not only the extent of his travels, but also how he succeeded in his ambition of capturing ‘atmosphere and light’ on the canvas no matter where in the world he was painting.

Established in 1986, for their first ten years, The Taylor Gallery were based in The Royal Arcade in London’s West End. There they held exhibitions of works by American Impressionist, Irish, Modern British, Marine and China Trade artists.

They no longer have retail premises but now operate by private appointment and through antique fairs, including the BADA and Olympia Fine Art & Antiques Fairs, and their website www.taylorgallery.com. Whilst still dealing in Marine and China Trade paintings, they now specialise in works by Edward Seago.

Born in Norfolk, Edward Seago was one of the most commercially successful artists of his time. Confined to bed by a heart problem for much of his childhood, he received only 18 months formal schooling and taught himself to paint. His fascination with clouds that is so apparent in his work dates from this period, when he was lying in bed drawing. Between the ages of 18 and 22, Seago worked at a circus, and it is from this period he studied animals and circus scenes in the manner of Dame Laura Knight. He later trained to be a fighter pilot, but was let down by his poor health. He was, however, invited to become unofficial artist to the Italian Campaign by General Alexander, Commander-in-Chief of the allies in Italy.

In 1946 Seago met a director of Colnaghi, Tom Baskett, who suggested he have an exhibition at the gallery’s premises on Old Bond Street. This proved such a success that he continued to show there for the next 20 years. His work was admired by HRH Prince Philip at the 1949 exhibition of the Royal Society of Portrait Painters, and as a result he was invited twice a year to Sandringham to paint with the Duke. Seago was later invited to join the Duke of Edinburgh on a painting trip to Antarctica on the Royal Yacht Britannia following the official opening of The Olympic Games of 1956 in Melbourne.

Seago travelled regularly on his boats, Endeavour and later Capricorn, visiting France, Turkey, Portugal and North Africa, although he always returned to his base in East Anglia. In 1962 he was invited to Hong Kong for three months by John Kidston Swire, Chairman of the parent company of the Far Eastern Trading and Shipping Group, and commissioned to paint six paintings of local scenes. From Hong Kong he travelled onto Burma and Thailand. Following this trip he changed from a plein-air artist to working from a sketchbook. Although he gave his boat up in favour of a studio in Sardinia, he continued to travel regularly until his death in 1974.
For press enquiries, further information and images: