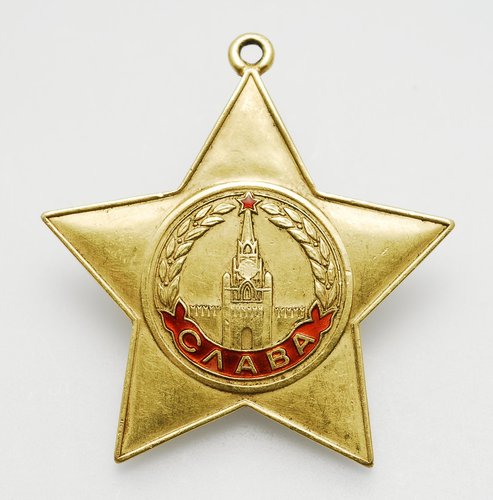 A Russian (Soviet Union) first degree Order of Glory Medals awarded in 1943 will be going under the hammer in November at Birmingham based auctioneers Fellows & Sons.

The Order of Glory, which was modelled closely upon the Tsarist Cross of St. George, had three degrees. A person initially received the third degree, and would subsequently be promoted to higher degrees for further acts of bravery; one who received all three degrees was called polniy kavaler ordenov slavy (full Cavalier of the Order of Glory). In total only 2620 gold first class orders were awarded and attained this Full Cavalier status.

The Order of Glory became defunct upon the collapse of the Soviet Union. In 2000, the Cross of St. George was revived to serve the same purpose of rewarding bravery in NCO's and enlisted service personnel.

The rare Order of Glory medal has been valued at £4,000-£6,000 and will feature in the Silver, Plated Ware, Coins & Medals auction to be held on 30 November at Fellows & Sons auction rooms in Birmingham.
Ends

Notes to Editors
• Pictures are available on request.
• Fellows & Sons is one of the UK’s oldest auctioneers, and is based in the Jewellery Quarter of Birmingham, UK. It was established in 1876 and remains a family business.
• The Silver, Plated Ware, Coins & Medalscan be viewed at: www.fellows.co.uk