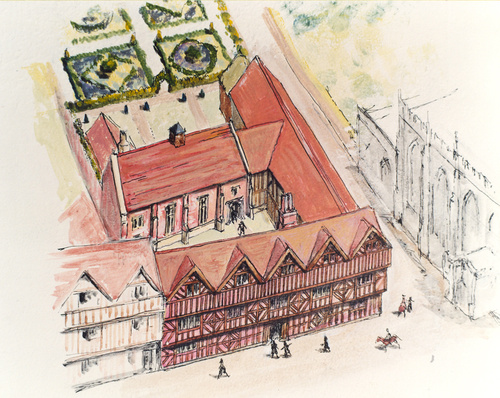 The archaeological dig will take place at New Place, the house that Shakespeare owned for 19 years and occupied at the time of his death in 1616. The ‘Dig for Shakespeare’ will see a team of archaeologists from Birmingham Archaeology, along with a hardy crew of volunteers, excavate three locations within the grounds of New Place in a dig where visitors will be able to interact with the archaeological team. A special scaffolding walkway and viewing platform is being installed so that visitors can have a close view of the trenches and will be invited to talk to the archaeologists as they work.

Shakespeare’s house at New Place was built on three sides of an open courtyard on the corner of Chapel Street and Chapel Lane. The largest trench to be dug will stretch from the servants’ quarters in the Chapel Street wing – where the foundations of the later 1702 building will be uncovered - across the courtyard to the rear wing, which is where Shakespeare and his family would have worked and lived.

A further trench will explore the area thought to have been his pantry and brewery, and one quarter of the 19th Century knot garden will be dug – into what would have been Shakespeare’s backyards. This is where archaeologists believe they might find defunct wells, filled in with refuse and waste when they ceased to be used.

Archaeologists often find that old wells hold all kinds of secrets, with the anaerobic (waterlogged) conditions preserving organic waste and detritus. It is hoped that these will give the Trust a real insight into the lives of the property’s occupants.

The public will be able to watch every stage of the dig from the start of the Easter holidays (27 March 2010) to October 2010. Archaeologists from Birmingham Archaeology working alongside a team of volunteers and staff from the Shakespeare Birthplace Trust will be explaining what they are doing, and showing visitors the artefacts that they are finding.

“Once the turf is lifted, our archaeologists will start work to dig down to foundation level and beyond with trowels (not a shovel or a JCB in sight) so that we can monitor closely anything hidden within the spoil. Six test pits excavated last October gave us confidence that this will be a productive dig,” adds Dr Diana Owen, Director of the Trust. “Who knows, we might find one of Shakespeare’s shoes, some of his discarded correspondence or even some of his personal effects – only time will tell!”

“We know a lot about Shakespeare’s work, but relatively little about his later life, particularly when he started to spend far more time back in his home town,” says Professor Stanley Wells, Chairman of the Shakespeare Birthplace Trust. “We are hopeful that this dig will represent one of the most significant research opportunities for Shakespeare fans through the world, revealing and confirming many details of his later life about which we had previously only speculated.”

Indeed, alongside the practical archaeology, a team of academic experts, chaired by Dr Paul Edmondson of the Trust and including Shakespeare scholars, historians, local experts and archaeologists will meet regularly through the dig process to interpret and discuss the significance of any finds. The Trust already holds an extensive archive of Shakespeare-related items, and is highly regarded as one of the world’s leading authorities on Shakespeare’s life.

Archaeologists will be working on the dig seven days a week. Visitors access the dig through Nash’s House on Chapel Street. Admission prices, which include access to Shakespeare’s Birthplace and exhibition, Nash’s House and New Place, and Hall’s Croft are £12.50 for adults, £8.00 for children and £11.50 for concessions.

The Shakespeare Birthplace Trust, founded in Stratford in 1847, is the guardian of the world’s greatest Shakespeare heritage sites, comprising Shakespeare’s Birthplace, Nash’s House & New Place, Hall’s Croft, Anne Hathaway’s Cottage and Mary Arden’s Farm. Offering a unique Shakespeare centred experience, The Trust is a truly global brand that has been attracting visitors to the houses since as early as the 17th century.

At the heart of all things ‘Shakespeare’, the Trust is not only at the forefront of academic learning, but also an iconic destination in the UK and the cornerstone of the region’s identity and tourism economy. The five houses offer a multi-layered experience for visitors unlike any other, giving people from all over the world the opportunity to learn about the life of the world’s greatest playwright, discover his work and experience a real sense of the times that influenced him here in Stratford.

The Shakespeare Houses and Gardens are winners of the Gold Award for ‘Best Tourism Experience in the Heart of England Excellence in Tourism Awards 2009.

For further information about the houses, please visit www.shakespeare.org.uk