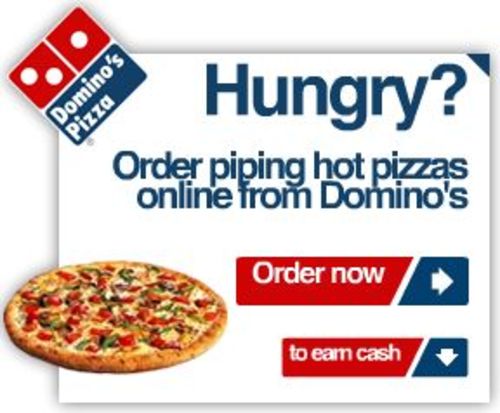 LONDON, March 17, 2010 – Thanks to a revolutionary new widget which was launched today, everyone with their own blog, site or even a Facebook account can cash in on the popularity of Domino’s Pizza. All you have to do is install the widget on your website or social networking page, start promoting Domino’s on your personal web space, and wait for the cash to roll in. So sign up and sit back – it’s time to let your website work for you!

The widget allows hungry visitors of your website to place an order with Domino’s immediately. It will keep track of all orders placed through your site and you will get a generous slice of the value of every purchase, 0.5% to be precise. So if your site whets your friend’s appetite, you won’t have to tighten your belt any further!
Make sure your friends can all see the advertisement properly, so that you’ll be their favourite pizza peddler.

Beat your friends to it and download the Domino’s widget today!

Founded in 1960, Domino’s Pizza is one of the world’s leading pizza delivery brands. Through its primarily franchised system, Domino’s Pizza operates a global network of more than 8,700 Domino’s Pizza stores in over 60 countries. Domino’s Pizza has a singular focus – the home delivery of pizza, freshly made to order with high quality ingredients.