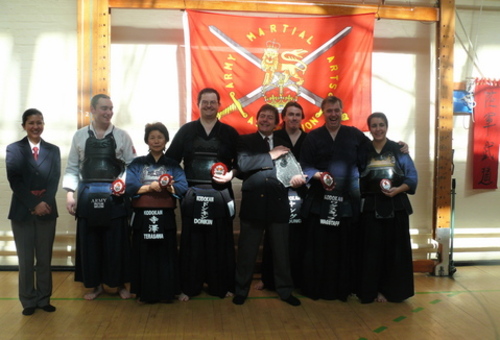 This event has only come about by the tireless efforts and dedication of two people Mr Adrian Rowe & Major David Worsley, through many years of hard work and it is therefore very fitting that this year is the 150th Anniversary of the formation of the British Army Physical Training Corps The Championship’s are planned again for next year when further selected clubs will also be invited adding to the competitor list.

The Head of Club at Kodokan Paul Budden (7th Dan Renshi) is now also actively involved with Kendo for the Army Martial Arts Association
The next big ‘competitive happening’ on the Calendar for Kodokan is the Charity Kendo Championships 3rd July 2010 being held at the Watford Leisure centre CENTRAL, this being an International event for ladies, men & juniors to raise money for Maggie's Centres and Macmillan Cancer Support

Kodokan aims & objectives do not purely revolve around competition though, as top level seminars are also organised by the club and run by prestigious high ranking teachers from Japan the first being on August 14th led by Yukuo Iwao 8th Dan Kyoshi and accompanied by 11 high graded female Kendo players.

Kodokan were also recently in the news regarding their ‘Prestigious’ Sports England Lottery funded grant awarded for the future development of Junior Kendo.

The programme started on the 27th February and already has junior members established attending the regular Saturday morning sessions and aiming to emulate their senior’s successes.

A major highlight of the year will be the presentation of Kendo at the Herts Youth Games being held at Hertfordshire Sports Village, Hatfield Business Park June 26th where aspects of Kendo will be presented to the 2000 attendees for the first time.

Kodokan are a registered NAKMAS Club