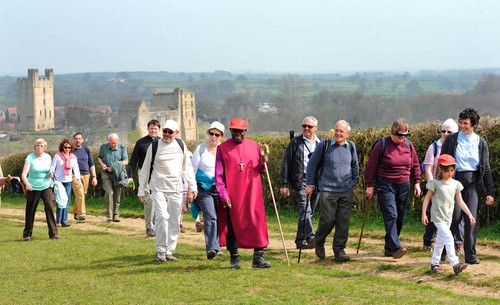 The Archbishop of York, Dr John Sentamu, yesterday (Saturday 24 April 2010) followed in the footsteps of one of Yorkshire’s most famous abbots, St Aelred of Rievaulx, walking from Helmsley Castle to Rievaulx Abbey as part of the site’s 900th anniversary celebrations of the birth of the saint.

The Archbishop was guided by TV historian, Julian Humphrys, in a two hour walk between the two English Heritage sites, retracing the route taken by Aelred when he first visited Rievaulx during a trip to Helmsley Castle. During the walk, Julian highlighted how Aelred’s time as abbot left its mark on the surrounding countryside, when Aelred inspired those living in and around the Abbey to create a hub of commerce and industry, with the Abbey’s lands worked hard as both fertile farmland and site of heavy industry for the smelting of iron and other metals – activities which left scars on the landscape still visible today.

The walk was followed by a private ceremony at Rievaulx Abbey hosted by Rev Chris Ellis, the event’s organiser and founder of the Ecumenical Fellowship of Aelred, in which the ruins echoed with the sound of hymns sung by the assembled congregation and plainsong. Abbot Joseph Delargy addressed the group on ‘Aelred: Theologian and Spiritual Guide’ and the Archbishop reflected on how Aelred’s teachings are still relevant in the 21st century.

Dr Sentamu was joined for the ceremony by members of the clergy, including Abbot Joseph Delargy and monks from the Cistercian Mount St. Bernard’s Abbey in Leicestershire, Sister Dorothy Stella and sisters from St Hilda’s Priory in Whitby, Abbess Andrea Savage and sisters from Stanbrook Abbey at Wass, North Yorkshire, and Canon Graham Usher, Rector of Hexham Abbey.

“The Ecumenical Fellowship of Aelred have been hosting small ceremonies at Rievaulx Abbey for several years, but with this key anniversary, we were delighted to help them make it such a memorable occasion,” says head of visitor operations for English Heritage, Clea Warner. “When you hear plainsong reverberating around the Rievaulx valley, it really does give you a wonderful impression of how the site would have been during Aelred’s tenure – and it is little wonder that so many people came to the Abbey on pilgrimages.”

Members of the public wanting to follow the pilgrimage route will have an excellent opportunity to do so over the May Bank Holiday weekend (Sunday 2 & Monday 3 May) when Julian Humphrys leads walkers over the same route. The two mile walk-and-talk will take approximately two and a half hours, with plenty of stops along the way as notable features are pointed out. Participants are advised to wear stout shoes and to bring weather-suitable clothing. Once at Rievaulx, visitors can enjoy the site’s hospitality – including the local produce cooked to perfection in the tea room !

Visitors can then return to Helmsley, either retracing their steps, or by taking the Moorsbus (an addition charge applies).

Picture shows: The Archbishop of York, Dr John Sentamu, with other walkers undertaking the pilgrimage from Helmsley Castle (in the background) to Rievaulx Abbey, following the footsteps of St Aelred. Photograph by Tony Bartholomew. (A selection of other photographs from the pilgrimage and following service are available on request - call Jay Commins on 0113 251 5698.)

About Aelred
Born in 1110 at Hexham in Northumberland and raised in the court of King David of Scotland, Aelred, first visited Rievaulx Abbey after staying at nearby Helmsley Castle on a diplomatic mission.

After taking the helm at Rievaulx, his commercial acumen coupled with his magnetic spiritual leadership, attracted a devoted following which saw the abbey’s population double, its buildings expand to accommodate them, its lands extend as far north as Teesside - and its reputation soar.

Aelred became a ‘celebrity’ in his own right with his acclaimed spiritual writings on how to live the qualities of God’s love and develop spiritual friendship. His wisdom and spirituality helped spread the philosophy of the Cistercian way of life as a simpler, less materialistic and more egalitarian way of life than its Benedictine counterpart - an order which had gained a reputation for offering a life of luxury only to those of high birth.

The back-to-basic, environmentally-friendly principles he extolled strike a familiar ‘green’ chord today. The inhabitants at Rievaulx, who included the lower classes as labourers and lay people, lived an austere, self-sufficient life, eating only one vegetarian meal a day in winter and observing silence.

Abbot Aelred’s health may have suffered as a result of this strict regime, which also included fasting and purging himself in cold baths. He was plagued by ill health and in his later years, was racked with pain from arthritis and kidney stones. The third abbot of Rievaulx was canonised after his death in 1167.

The Ecumenical Fellowship of Aelred was founded in 1993 by Revd. Christopher Ellis as the then Ecumenical Adviser to the Archbishop of York. The Fellowship is a group of over one hundred people drawn from all Christian denominations throughout North Yorkshire. Chris Ellis comments," Our focus is to study Christian faith and life together in an atmosphere of mutual respect and enrichment, love and spiritual friendship - qualities which were at the heart of Aelred's spirituality and his understanding that unity in love between people is the basis for true community. Surely, a lesson for 21st century Britain! "

About the event programme
The Medieval Pilgrimage is just one of a series of events planned for Rievaulx Abbey in 2010 which celebrate the 900th anniversary of the birth of Aelred, including: