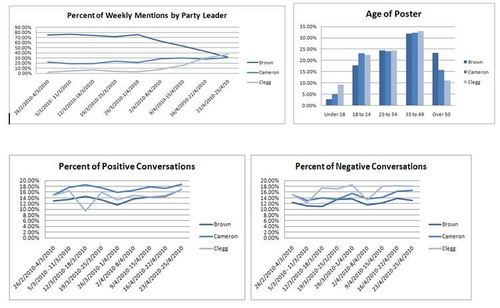 Although Gordon Brown has consistently had the highest volume in overall conversations compared to Cameron and Clegg, over the last week, the volume of conversations has come to a head with all three parties getting an almost identical share of voice online. SM2 revealed that Brown has a higher influence among the older members of the public (23% of over 50’s) but doesn’t speak directly to younger members through micro blogging sites (only 14%). Clegg however, received the highest percentage of mentions through micro blogging with 33% and David Cameron receives 28%. This can be explained by the fact that Nick Clegg has his own personal Twitter feed with 27,423 followers, which is substantial when compared to the overall number of those following each party’s Twitter handles, with the Lib Dems with 17,670 followers compared to the Conservatives 28,771.

Nick Clegg’s support on social media has grown positively with 17% of the conversations now trending positive compared to only 14% before the live debates, with a significant dip in popularity mid-March. Positive conversations for both Brown and Cameron have risen steadily since February, mirroring one another and both taking a slight dip towards the end of March. Negative sentiment across Labour and the Conservatives have also been close over the past two months but interestingly, despite the increase in positive sentiment around Clegg, he is still the leader also attracting most negative feedback. This suggests that while the debates have no doubt risen his profile, the opinion out there is still very mixed about the Liberal Democrats.

The report also examines key topics discussed in ‘theme clouds’ with the word ‘health’ a prominent keyword for Brown and ‘war’ the largest in Brown’s negative cloud. The word ‘economy’ plays a significant role in all the party leaders’ clouds with the terms ‘hung’ and ‘parliament’ featuring in both Nick Clegg’s and David Cameron’s theme clouds but not Gordon Brown’s.

David Eldridge, CEO of Alterian commented on the analysis, “This is becoming one of the most tense and widely discussed elections in recent years. Following Obama’s successful campaign last year where he effectively utilised social media to listen and engage with his voters, our own leaders are now taking note of the strength of social media, although it is still very much in its infancy. A political campaign is no different from marketing where companies need to appeal to the individual and engage on a one-to-one basis. The political leaders are being increasingly judged by their actions and willingness to involve voters, with just over a week to go anything could happen.”

“Statistics show that during the election of the 1970s only 9% of voters at this stage of the campaign were undecided. However, in this election, there are 43% of voters currently undecided; illustrating that the ways the leaders engage with their audiences online during these last few weeks leading up to the final poll is more vital than ever.”

About Alterian
Alterian (LSE: ALN) empowers organizations to create relevant, effective and engaging experiences with their audience that help build value and reinforce commitment to their brand, through the use of the Alterian Integrated Marketing Platform. Alterian drives the transformation of marketing and communications, making it practical and cost-effective for companies to orchestrate multichannel engagement with the individual.
Alterian’s unprecedented integration of analytics, content and execution through industry leading tools, such as the Dynamic Messenger email platform, SM2 Social Media Monitoring platform and the award winning Content Management solutions, enables companies to build integrated communication strategies which create a true picture of the individual.
Alterian works with marketing services partners, system integrators and agencies who recognize the need to plan and deliver coordinated customer engagement services in partnership with their clients. For more information about Alterian, products within the Alterian Integrated Marketing Platform or Alterian’s Partner Network, visit www.alterian.com or the Alterian blog at www.engagingtimes.com.