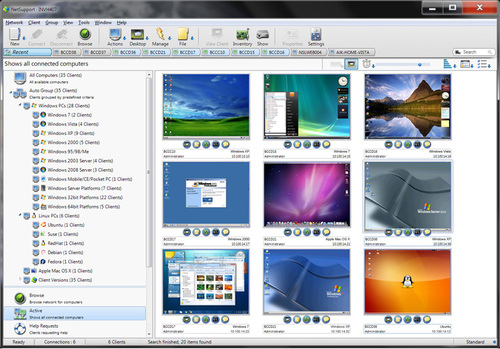 The ability to instantly view machines grouped, for example, by Windows, Mac OS or Linux Distribution, will make it much easier to plan for upgrades

The latest version offers a fresh user experience with a restyled interface, performance improvements and a range of shortcut features that now make it even easier for you to support the diverse range of systems now in use across the modern enterprise.

NetSupport Manager has been helping organisations optimise the delivery of their IT support services since 1989 and whilst the use of Remote Control software is now commonplace, unlike 20 years ago the diverse range of platforms, protocols and physical assets now in use provide PC Management and Remote Control Software solutions with the continuous challenge of being able to offer support to a variety of configurations.

The success of NetSupport Manager lies in its ability to continually evolve to meet the needs of any environment. Combining comprehensive multi-platform support for Windows, Linux, MAC, Solaris, CE, Pocket PC and Windows Mobile systems, with a range of PC Management tools designed to ensure that critical IT infrastructure is available when needed most, NetSupport Manager offers complete compatibility for today’s corporate networks.

Highlights in version 11 include a new dynamic ‘Auto-Groups’ facility that provides an instant hierarchal view of your remote Client machines by platform and operating system. With a number of manufacturers now shipping servers, laptops and desktops that support Intel® Core™ vPro™ processors, NetSupport Manager can now be configured to browse for this capability, even where a NetSupport Client isn’t installed, listing the machines as a separate group and enabling a range of remote functions to be performed where previously a physical visit to the machine would have been required.

Intel vPro technology enables IT professionals to remotely manage a PC even if the system is turned off, or it has an inoperative operating system or hard disk. As a result, PCs can be powered off at night, saving energy expense, and patching can be done in those off hours to increase productivity. Many fixes also can be made remotely, saving the time and expense of deskside visits.

Version 11 also offers noticeable improvements to operability and performance for remote control of Windows 7, Vista and Server 2008 based machines, as well as added support for handling User Account Controls. File Transfer benefits from a number of efficiency improvements, including the ability to conveniently drag and drop files direct to the desktop of a viewed machine and Audio Support has been enhanced to provide seamless streaming of the remote PC’s audio.

Expanding on the latest release, NetSupport’s Development Director, Rob Hawkins, commented: “Maintaining our position as the leading provider of multi-platform support software has been the primary focus of this release. Increasingly, IT support teams are having to manage a wide range of systems and version 11’s redesigned interface is sure to appeal. The ability to instantly view machines grouped, for example, by Windows, Mac OS or Linux Distribution, will make it much easier to plan for upgrades or the rollout of new technology to replace old. We’ve also taken steps to ensure that remote control performance is improved within a Windows 7, Vista and Server 2008 environment.”

With almost 9,000,000 systems worldwide supported by NetSupport technology, NetSupport Manager is a proven solution for any environment. You can learn more about the enhancements in version 11 and download a free trial by visiting www.netsupportmanager.com.

Headquartered in the UK, NetSupport have been supplying Desktop and Network Management software to both corporate and education customers since 1989.

NetSupport and its derivatives are sold worldwide and enjoy market-leading status in many countries, with a worldwide install base exceeding 8 million desktops. NetSupport is recognised as one of the fastest growing technology companies in The EU, consistently included within the Deloitte & Touche Fast 50 Awards (6 years running) and previously voted the #1 UK Technology Exporter (European Technology Forum) as well as ICT Exporter of the Year at the 2009 BETT Awards.

This press release was distributed by ResponseSource Press Release Wire on behalf of NetSupport in the following categories: Computing & Telecoms, for more information visit https://pressreleasewire.responsesource.com/about.