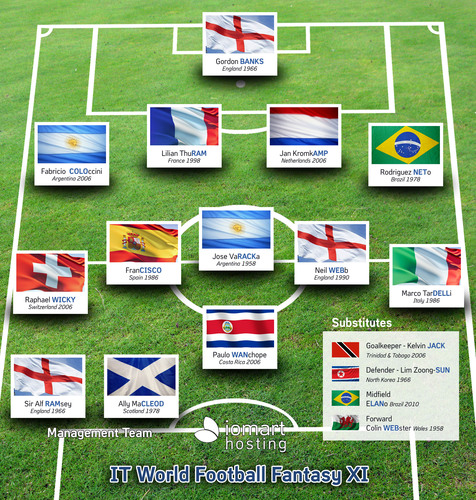 we hope it sparks some virtual fun and games for the tech community.

As Fabio Capello names his provisional England World Cup squad today (Tuesday) managed hosting and cloud computing company iomart Hosting has come up with its own computing Fantasy XI using only players that have represented their countries at World Cup tournaments.

The squad lining up in a 4-5-1 formation includes players in their normal positions.

Phil Worms, marketing director for iomart Hosting, said:” We really had to rack our brains and go back to the dawn of the commercial computer age for some of our fantasy names but we hope it sparks some virtual fun and games for the tech community.”

iomart Hosting and its Netintelligence partner brand are using the World Cup as the theme for their display at the SmartGov LIVE event at the ExCel Arena next month (June 15-16). They will be giving away three signed world legends of football shirts during the event : a 1966 England replica shirt signed by Bobby Charlton; a 1966 Portugal replica shirt signed by Eusebio and a limited edition 1970 Brazil shirt signed by Pele.

iomart Hosting is one of the UK’s leading providers of hosting services. From a single server through to private cloud networks, iomart specialises in the delivery and management of mission-critical hosting services, enabling customers to reduce the costs, complexity and risks associated with maintaining their own web and online applications.

By physically owning and managing its own network infrastructure, including five state-of-the-art data centres in the UK, it offers world-beating levels of service to its customers.
For more information visit www.iomarthosting.com