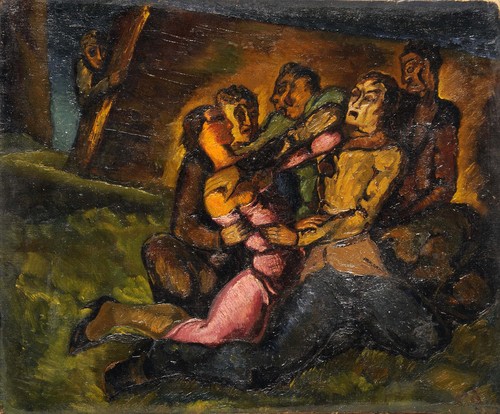 A unique and valuable collection of paintings go under the hammer on the 4th June at Midlands-based auction house, Biddle & Webb which will be included in other lots in their Fine Quarterly Picture, Antique and Silver Auction.

The paintings are from a variety of famous artists with origins in both Eastern and Western Europe including works from Georgia, Russia, Spain, Scotland and the South West of England.

Among the star lots are paintings from Russian artist Alexey Gavrilovich Venetsianov (1780 – 1847) who was born in Moscow and considered to be one of the most important Russian painters of the nineteenth century. The unsigned painting has an estimated sale price of £35,000 to £40,000.

The sale also includes a series of paintings by Lado Gudiachvili (1896 – 1980) who was born in Russia’s neighbouring country Georgia. The five works of art are expected to sell as individual lots from anything between £5,000 to £30,000 depending on quality and rarity.

Gudiachvili was such a prominent figure in Eastern artistic circles that there is a statue dedicated to him in the Georgian capital of Tbilisi.

Closer to home the sale includes a painting from the well known English artist Beryl Cook (1926 – 2008) famous for her humorous depictions of bold bulky figures of middle-aged people. Apparently Victoria Wood once described her work as being like “Rubens with jokes”.

Vettriano is acclaimed for ‘The Singing Butler’ a popular image that has been mass produced on cards and other items of popular merchandise. Some of his paintings have commanded up to six figures in previous auctions.

Biddle & Webb’s managing director, Jeremy Thornton is really excited by the art included in the sale and optimistic as to the level of interest it will generate. He says: “This is the sort of fine art in terms of rarity and origin that seldom gets out of the London salerooms such as Sotheby’s and Christie’s, so for a regional auction house it is a unique opportunity for us to handle items of such exquisite quality.

“The different cultural influences that have inspired these paintings are clearly depicted in the diversity of the subject matter and the unique styles of the artists. Couple this with some of the extraordinary prices similar pieces have commanded in past auctions, makes it a sale ‘not to be missed’ for avid collectors and art connoisseurs world-wide.”

For further information on the ‘star lots’ or to request a catalogue visit: http://www.biddleandwebb.co.uk/starlots.cfm