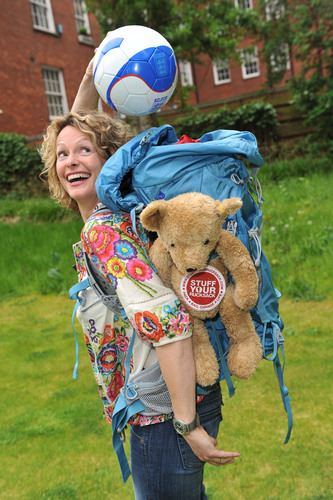 “One day, I want people to say: ‘Have I got my visa? Have I got my passport? Have I checked the Stuff Your Rucksack site?“

Stuff Your Rucksack is a charitable website that helps responsible travellers to make a practical difference to the lives of people in developing countries by packing items that can help the communities they visit – for instance books and pencils for schoolchildren in Sierra Leone, toys and clothes for slum children in India and even footballs and trainers to give children in South Africa during the World Cup.

Think Publishing , the communications agency behind the website, turned to iomart Hosting, one of Europe’s leading providers of managed hosting and cloud computing services, to ensure the site could handle a sharp increase in visitors after Kate Humble officially launched Stuff Your Rucksack last week.

Phil Worms, marketing director at iomart Hosting, said:” Kate Humble’s decision to widen the appeal of the website has generated a huge amount of interest from travellers across the globe. Our cloud hosting solution is perfect for websites that have to be constantly available whenever and wherever they are being accessed from and have to be able to cope with sudden surges in activity at peak travelling times of the year.”

Kate Humble is on our television screens for the next few weeks as part of the BBC’s Springwatch. The broadcaster and travel writer started Stuff Your Rucksack after realising how much of a difference she could make to the remote communities she was visiting.

Kate said: “I started the site out of frustration as I have travelled to many developing countries and come across so many small projects that needed things I could have easily brought with me, had I been able to find out in advance. This is what Stuff Your Rucksack does; lets travellers know before they leave home what’s needed where they are going. Our logo says ‘Pack a Bag, Change a Life’. It really does! And the traveller gets a unique experience that can’t be bought or found in a guidebook.”

With more than 100 charities and not-for-profit organisations now registered with Stuff Your Rucksack , Kate felt it was time to officially launch the site to urge anyone travelling abroad this year to log-on and find out what they can pack to change someone’s life.

Kate explained:” I am determined that no traveller experiences the same frustration of arriving at a small, inspiring project to learn the items they need cost practically nothing, and are sat at home on the kitchen table.“

She added: “One day, I want people to say: ‘Have I got my visa? Have I got my passport? Have I checked the Stuff Your Rucksack site?“

Phil Worms said: “We are delighted to be able to officially show our support for Stuff Your Rucksack by providing Think with web hosting, through one of our cloud solutions. The concept behind the charity is so simple and yet so effective and it really does have the power to bring about positive, tangible change to so many lives throughout the world.”

iomart Hosting is part of iomart Group plc which yesterday (June 2 2010) announced its full-year results showing a 55% increase in revenues and a doubling of its hosting customers.

iomart Hosting is one of the UK’s leading providers of hosting services. From a single server through to private cloud networks, iomart specialises in the delivery and management of mission-critical hosting services, enabling customers to reduce the costs, complexity and risks associated with maintaining their own web and online applications.
By physically owning and managing its own network infrastructure, including five state-of-the-art data centres in the UK, it offers world-beating levels of service to its customers.