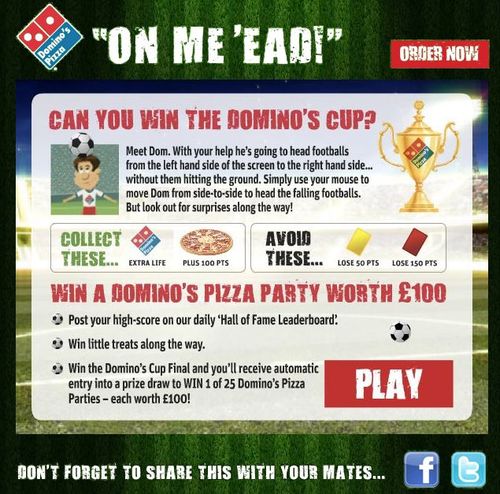 LONDON, June 11, 2010 – Since pizza is one of England’s favourite meals to eat while watching football, Domino’s Pizza will follow the game together with all British fans. To coincide with England’s campaign in South Africa, Domino’s Pizza is hosting three competitions with delicious prizes.

Today, Domino’s Pizza has launched a competition on Facebook to find the current squad’s best lookalikes. To enter the Footballer Lookalike Competition, fans can upload a picture of themselves or their friends via the events tab of the Facebook fan page of Domino's Pizza UK. Every week, Domino’s will hand out free pizza vouchers to the best Lampard lookalike, Defoe double or other imitation of one of Fabio Capello’s chosen 23. Meanwhile, Facebook users can vote for their favourite picture too by clicking ‘like’ under each picture. After four weeks, the public’s favourite will win a free pizza party (worth £100) for the final.

Fans on Facebook can also win a free pizza during every England match. If, for example, Defoe is the first English player to score a goal, the first person to write “Defoe scored me a free Domino’s!” on the official Domino’s Pizza UK fan page wins a free pizza.

And last but not least, footie fans can compete for the Domino’s Cup in the online football game On me ‘ead. Prizes include 25 Domino’s Pizza Parties, each worth £100, and various discount codes. Players have to head footballs from one side of the screen to the other, without letting them hit the ground. Not recommended during the match – you don’t want to miss the first goal!