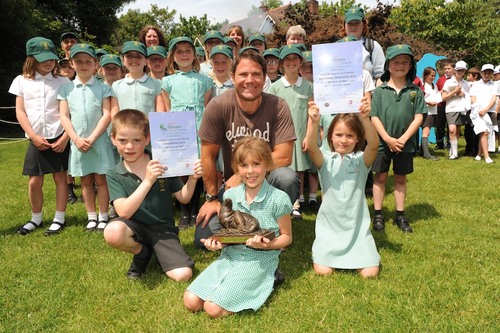 The national winner of the 2010 TOTAL Green School Awards has been named as Pilling St John’s Primary School from Preston for its innovative ‘Pilling Coral Reef’ project.

Now in its fourth year, the TOTAL Green School Awards is a national competition for school children, which aims to generate interest in the environment and to raise awareness of the need for sustainable energy sources. The 2010 awards, which are run by the Young People’s Trust for the Environment (YPTE) in partnership with TOTAL, attracted entrants from almost 26,000 school children across the UK.

The ‘Pilling Coral Reef’ project began when the children bought an acre of coral reef off the coast of Indonesia. This inspired the pupils to start their own reef at school and, after conducting in-depth research into the life of coral, decided to knit their own. A subsequent visit to the Blackpool Sea Life Centre inspired the children to create their own centre to house the knitted coral reef as well as a mini aquaria, which was made from old shoe boxes.

The finished aquaria was placed on display in the school corridors along with a sea life guide, and local people were invited to visit for an entry fee of 20p, which was donated to a turtle conservation charity. Since then, the ‘Pilling Coral Reef’ has been on tour and was shown in Pilling Methodist Church Hall before going on to be exhibited at the Aquarium of the Lakes.

The 29 children, aged six to nine, who took part in the winning project joined other regional finalists from across the UK at the national awards ceremony at London Zoo, whilst a simultaneous ceremony took place in Glasgow for the Scottish winners of the awards. At the ceremony, the school received a certificate and cheque for £5,000 for its ‘Pilling Coral Reef’ project and was presented with the prize by YPTE President Steve Backshall.

Claire Elliot, External Communications Manager at TOTAL UK, sponsor of the TOTAL Green School Awards said: “It is impressive to see the huge effort that primary school children have put into thinking about energy and the impact it is having on our lives and the environment. The standard of project work has been excellent and the positive initiative taken by the children to tackle current environmental issues has been outstanding.”

YPTE Director, Peter Littlewood, said: “The children of Pilling St John’s school have come up with two brilliant projects this year and we couldn’t fault them on either. The ‘Christmas Card Reduction’ project was exceptional, simple yet effective, and an idea we’ll be promoting to all the UK’s schools this Christmas. I’ve never seen a project have such an effect on a school as the ‘Pilling Coral Reef’. The children’s enthusiasm for this subject is evident by the end result.”

The TOTAL Green School Awards competition will run again in 2011. For details on how to enter go to http://www.totalgreenschoolawards.org

Additional images from the event are available. Please see contact details below.

About The Young People’s Trust for the Environment

The Young People’s Trust for the Environment (YPTE) is a registered charity that was established in 1982. Its aim is to inspire and encourage young people’s understanding of the environment and the need for sustainability through remote and face-to-face communication and learning.

TOTAL is the world’s 5th largest energy group and Europe’s leading refiner and marketer of fuels. TOTAL has interests in 27 refineries and over 17,000 service stations throughout the world.

Total UK is the group’s UK refining and marketing subsidiary, and is based in Watford. It has one refinery, a lubricant blending plant and a bitumen plant as well as 850 TOTAL branded service stations throughout England and Wales, which accounts for 10 per cent of the UK market, selling over 3 billion litres of fuel and lubricants each year.
For further information, please contact the Total UK Press Office on 0870 241 4337.