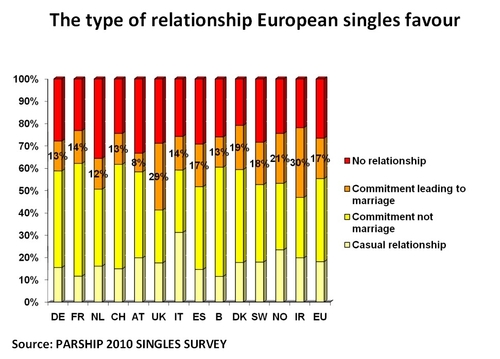 However, according to a new survey by PARSHIP, Europe’s largest premium online dating service, which uses a rigorous personality profiling test to determine compatibility, unlike their European counterparts – who, with the exception of Ireland, would choose an unformalised long-term relationship over marriage (across Europe an average of 35% favour a long-term relationship and 17% a marital commitment) – UK singles would go for wedding rings (29%) rather than simple cohabitation (24%).

In the survey of 5,000 single people it found marriage was not a priority for the majority of Europeans. All the mainland countries in the survey favour cohabitation, with – at the other end of the spectrum from the British Isles – only 8% of Austrians wanting marriage. As might be expected, it’s women in the UK who especially favour marriage vows: one third of them (34%) are looking forward to their Big Day, compared to just one

Bianca Mercer, PARSHIP’s Country Manager UK and Ireland, commented:
“Whilst these survey figures may suggest a large proportion -- over half – of UK single people are looking for a long-term relationship it’s difficult to interpret exactly what proportion see marriage as the ideal form of commitment. Many people will be open to the idea of marriage but will not necessarily know if it is for them until they have met the right person. So, even though we cannot say exactly what percentage of people intend to marry in the future, when the UK is compared to other countries in Europe, the country still has relatively traditional views on marriage.

For example, 29% of UK singles are looking for commitment leading to marriage in the future, compared to only 8% of Austrians. UK singles’ relatively traditional attitudes to relationships are echoed in their views on raising a family. 27% of UK singles believe that it’s preferable that one parent should stay at home to raise a family while the other person pursues their career. This proportion was the third highest amongst the European countries surveyed. The lowest were the Spanish, where 7% felt it preferable for one parent to give up work to bring up children.”

PARSHIP.co.uk, the largest premium online matchmaking service in the UK, is specifically for people who are serious about forming a lasting relationship and is built on a rigorous personality profiling test that determines compatibility.
It is the British subsidiary of Europe’s most successful serious online dating service, now with millions of members, predominantly affluent, educated men and women between 28 and 55 years old.

Since its launch in Germany in 2001, PARSHIP has matched thousands people who are serious about forming a long-lasting relationship, and it now operates in 14 countries of Western Europe and also in Mexico

PARSHIP GmbH is headquartered in Hamburg and is 87%-owned by Holtzbrinck networXs AG, part of the Georg von Holtzbrinck publishing group, one of Germany’s largest publishing companies with financial interests in more than 80 companies, including the Macmillan Group.

About the 2010 Singles Survey

For this study, conducted in May 2010, PARSHIP joined forces with the market research institute Innofact to survey more than 13,000 people aged between 18 and 59, single and in long-term relationships, in 13 Western European countries. The study focuses on the topics of lifestyle, relationships, looking for a partner and online dating, embracing more than 100 different themes. The random sample in each country was identically structured in terms of age and gender, with a 50/50 split between: male and female respondents; single people/partnered people; the 18-39 and 40-59 age groups. The survey covered: Austria, Belgium, Denmark, France, Germany, Ireland, Italy, the Netherlands, Norway, Spain, Sweden, Switzerland, and the UK.