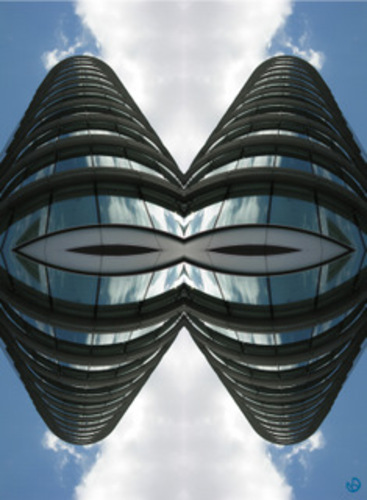 Kate Cledwyn launches ‘Mirrored City’ her London debut solo exhibition on the 12th October. Inspired by the constantly evolving architecture of the City of London. Cledwyn’s work is already in private and corporate collections and this exhibition offers collectors an opportunity to view her recent studies of the interaction between historic and modern architecture.
This collection of, limited edition, photographic works are printed on various media to heighten the architect’s original design. Aluminium and acrylic have been used to emphasise the buildings’ strength and beauty by reflecting the use of the construction materials used. Other works are printed on canvas to indulge the surprising textural qualities found.

The original images have become part of a bigger design rather than the subject of the shot itself. This technique allows the artist to study the relationships between structures and in their urban or natural environment.

The echoed columns of glass and steel in ‘Silver Shafts’ is an example of this method, showing the overwhelming impact of the subject on its’ skyline.

In ‘Funnel’, the viewer’s eye is drawn to the central glazed vortex alluding to the funnel of money being generated within these glass walls.
The ‘Conflict’ of town and country, perhaps an echo of the artist’s own experience, is the subject of this work, where the tubular City building and the lush greenery of the trees lining the street vie for attention in the glass walls of a building opposite. Whereas in ‘Captured’, 18th century architecture is reflected in the steel armature of a contemporary office - illustrates how historic and modern exist together in this constantly evolving city.
This series of works takes monuments well-known to Londoners and tourists alike, and creates a tapestry from them. ‘Bell Pulls’ has the immense dome of St Paul’s juxtaposed between the vertical axes of neighbouring office blocks creating a repeating pattern. In ‘Ben’, and ‘Minced’, Cledwyn has used images of Westminster to create a ‘kilim’ of these renowned Parliamentary buildings. ‘Double Vision’ with its cats’ eyes, creates a quatrefoil from the London Eye, whilst ‘Towering’ has created a tribal mask from the handling of this reversed image of a curvilinear glass office.
The inhabitants of this gleaming metropolis get a look in with ‘Street’. This study of commuters seems to be inspired by Gilbert & George’s genre. ‘Pedestrian’, pays homage to time lapse photography and the film noir with its monochrome strip. 'Biking Reflections' forms a composition which emphasizes our busy lives and our love of this vital mode of city transport. In it, a collection of motor bikes morph into what appears to be multi-winged insects and heart shapes.
Several of these architectural works have also been mounted within large perspex blocks, which are lit internally, so the image glows from within. A selection of images chosen from ‘Mirrored City’ will be exhibited in a darkened installation, where two dimensional art becomes three dimensional.

Cledwyn’s passion is the detail and structure in her natural surroundings. This fascination has inspired the patterns and designs created in her art.

Kate’s work will also be in a group show at The Lennox Gallery,
77 Moore Park Road, London SW6 from 1st November, 2010.

Notes to Editors:
Kate Cledwyn
Kate Cledwyn’s multi media work was born from her observations of detail and design, composition and construction. Naturally formed and man made patterns are everywhere and by working with a camera she found that she could intensify that vision. By using repetition and mirroring she could emphasise the order and natural symmetry, creating calming satisfying images. Inspiration surrounds her, focusing on nature and architecture, observing the effects of light and reflection feeds her imagination and conjures up new shapes and designs that challenge the perceptions of our world.

Working on commissions in Portugal, she gathered images from the local environment, using its colours, views, the sea, the beaches and the vegetation to inspire her. She realised how important her choice of the printing medium was and how much it enhanced her work. Kate printed her ideas onto fabric and canvas, hung them on pieces of raw, beach combed rope and bamboo to enhance their effect.

The qualities of water became her next intriguing project, its movement and colour, its malleability and flexibility. It’s ability to reflect and yet absorb allowing its colour and form to be manipulated by its surroundings. She printed this collection as C type photographic prints mounted onto aluminium and surface bonded with acrylic to retain the glassy reflective properties of the water.

Her latest ideas involve combining her love of photography with her passion for sculpture, turning 2D images into 3D pieces. By introducing and exploring light and its effects on large blocks of polished clear acrylic, and most recently working with clear cast acrylic, creating a whole new dimension to her work. The excitement in seeing what she can achieve with this combination of media has caused her many sleepless nights and filled her ideas book up full to bursting as her work continues to evolve.

Kate has recently moved to London to promote her work and mix more in the art world. Previously she lived all her life in Hampshire in the South of England. In 2006 and 2007 she studied Sculpture and ceramics at Southampton’s City College and followed this up with a Photographic Course with Mike Bell Photography in 2009 and attended Kensington & Chelsea Art College.