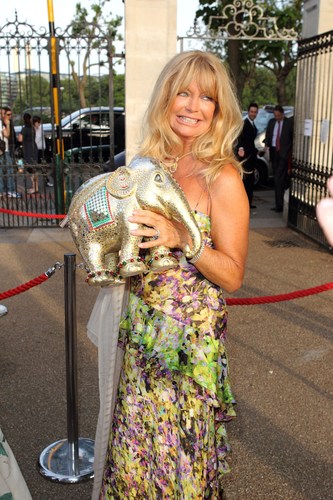 We would like to thank Easyspace for being the most wonderful supporter of this campaign and our work. It means a great deal to us.

Hollywood stars Goldie Hawn and film-star turned socialite Elizabeth Hurley watched as Jack Vettriano’s elephant – based on his famous Singing Butler painting – attracted the highest bid of £155,000. Easyspace’s elephant ‘Cosmos’ – which was created by students at Glasgow Metropolitan College – raised £7000 having been purchased by the brand’s parent company iomart Group

The celebrity auction, held at the Royal Hospital Chelsea, marked the end of the Elephant Parade, a colourful public exhibition of 258 colourful life-sized elephants designed to raise awareness of the plight of the Asian elephant. In all over £1 million was raised – including monies from a raffle drawn by Princesses Beatrice and Eugenie of York. The funds will be used by the organising charity The Elephant Family and 15 other UK conservation charities on projects to protect the Asian elephant.

Jack Vettriano said he was “dumbstruck” by the price of his work but joked at the auction: “I'm worth every penny. I was absolutely delighted to be asked to take part because it's such a wonderful cause.”

Phil Worms, marketing director for iomart Group, said : "It was incredible seeing our Easyspace elephant being admired by film stars and royalty. The students of Glasgow Met did a fantastic job for us. We are delighted to have been involved in such a worthwhile fundraising event and we’re really pleased to be bringing one of Scotland’s elephants home."

‘Cosmos’ will go on display at iomart Group’s headquarters at the West of Scotland Science Park once it is transported back to Scotland. It has previously been on display at Glasgow’s Kelvingrove Art Gallery & Museum.

Worms added: “Easyspace has been involved with the Elephant Parade since its early inception last year, and has been donating cash raised from the sale of domain names to the Elephant Family’s Asian elephant campaign since last September.”

Mary Powys, project manager for the Elephant Parade, oversaw the auction. She said afterwards: "We are all walking on air today and iomart’s purchase of Cosmos added a further cherry to the cake! We would like to thank Easyspace for being the most wonderful supporter of this campaign and our work. It means a great deal to us."

A second auction of the next tranche of Elephants is set to take place tomorrow, Saturday 3rd July, at the Chelsea Hospital, with the remainder being auctioned online.

More than 165,000 people have been to see the Elephant Parade display since the elephants were moved from the streets of London to the grounds of the Royal Hospital, home to the Chelsea pensioners, last week - that’s more than the number who attended the Chelsea Flower Show.

Easyspace:
Founded in 1997, and purchased by the iomart Group in 2004, Easyspace is one of the largest providers of web services in the UK.
Over the past decade, Easyspace has gained a reputation for offering high quality and innovative products backed by excellent customer service. The company has grown to become one of Europe’s largest hosting companies serving over 300,000 consumer and SOHO customers.
Initially established as a domain registration and web hosting provider, Easyspace has evolved to now offer dedicated servers, virtual servers, web design and extended services such as ecommerce solutions, email and more.

Elephant Family:
Within only 100 years the elephant population has shrunk by over 90%, dropping from 250,000 to an estimated 25,000, placing this valuable species dangerously close to extinction. If current trends continue the Asian elephant will cease to exist in the wild by 2050. Elephant Family has been campaigning for conservation of the Asian elephant since 2002, and with this new project it aims to grow public awareness and gather signatures for a government petition and to raise vital funds for conservation projects in Asia, securing the Asian elephants a place in our future. Each artist and designer has been given an individual 1.65m (L) x 1.48m (H) x 0.70m (W) elephant and asked to create something completely unique.