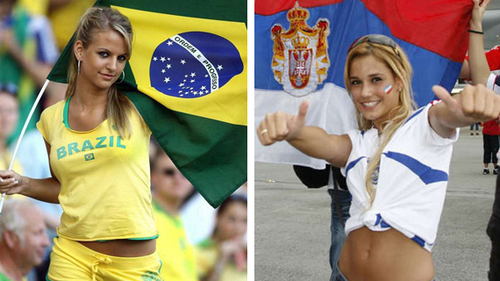 Brazil had a disappointing World Cup by their excellent standards, but at least they made it to the grand final of a competition to find the fittest World Cup fans.

Throughout the competition visitors to the PartyBets World Cup portal have been making their choices –and almost three-quarters of the final votes went to a brown-eyed blonde with a cheeky smile from Serbia.

England also did better than Fabio Capello’s World Cup squad managed in South Africa. They got through to the semi-finals, before eventually being beaten by the runner-up from Brazil.

Full details of the Fittest Fans competition can be found here http://worldcup.partybets.com/category/world-cup-news/fittes...

The PartyBets mission was to find out exactly who were the greatest football supporters at the South Africa 2010 World Cup. And what better way to do that than by putting the very best female football fans head-to-head in our very own World Cup tournament?

Warren Lush of PartyBets commented: “We decided before the World cup that we would do something that was a bit of fun – a bit of a distraction for people worrying about their teams doing badly, or the odds not going their way.”

“There were lots of beautiful girls at this World Cup, so it was difficult to make a shortlist. We hope the girl from Serbia will find out she is a winner!”

All the latest team news, opinions and betting tips from the 2010 FIFA World Cup are shared here. Whether a shock result has thrown the tournament betting wide open or a key injury has transformed the top scorer market, the PartyBets news updates will keep everyone up to date with the latest World Cup betting news.

Note to editors
"FIFA", "WORLD CUP", "SOUTH AFRICA 2010", "2010 FIFA WORLD CUP SOUTH AFRICA" and "FIFA WORLD CUP" are trade marks of FIFA. PartyBets is not licensed, endorsed, sponsored by or otherwise affiliated with FIFA or the World Cup and no such relationship is claimed, or should be inferred.
-ends-