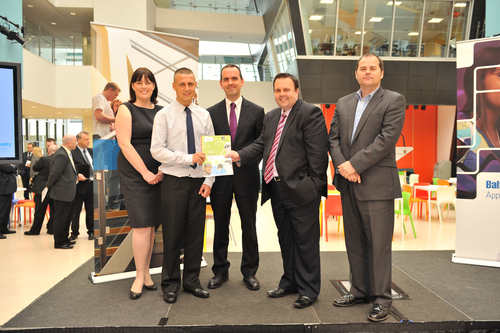 Young people all over Merseyside are set to benefit from training and job opportunities thanks to a new apprenticeship scheme launched by Balfour Beatty.

The first of the two apprentices to join the scheme were formally signed up at the event. Stephen Gilchrist (17) of Kirkby will be undertaking a General Construction Operations Apprenticeship and Ben Howarth (16) of Hunts Cross will be trained in bricklaying through Balfour Beatty Apprenticeships.

“Through this innovative and far reaching programme Balfour Beatty will transform the futures of a great many young people. There is a huge amount of untapped talent within our communities and it is our collective duty to harness that potential. Apprenticeship schemes like this are vital to social and economic progress. This is literally a lifeline for many youngsters facing uncertainty in the current climate.”

Balfour Beatty Apprenticeships was developed to maximise opportunities for young people to benefit from the significant projects which Balfour Beatty are currently undertaking in the region. Balfour Beatty Construction is completing work on the remaining £60million Knowsley schools programme and Liverpool’s Wave 2 schools programme of £56million. Birse Civils is working with Liverpool City Council and its partners on Edge Lane West, the final phase of the Edge Lane Highways and Environmental Improvement Scheme, whilst Mansell will be working with the Merseyside Fire & Rescue Service on seven new community fire stations.

“In the current climate employers may be reluctant to take on more staff and may not have the resources to implement full scale apprenticeships internally. We have worked closely with our supply network to create a scheme which takes the risk away from local companies. We are looking for motivated, hard working young people who are committed to a better future. Today we have seen evidence that there is no shortage of talent in Merseyside and we are looking forward to watching the progress of all our apprentices.”

• Based in Liverpool’s St Paul’s Square, Balfour Beatty’s links with Liverpool date back more than 60 years. Recent regeneration projects include the £111m transformation of Liverpool One and the recently completed Lime Street Gateway. Balfour Beatty has a longstanding commitment to supporting the region’s communities and has invested millions into the City Region.

• Balfour Beatty has worked extensively with many schools in the area creating inspirational learning environments. Balfour Beatty has completed almost £136million of work rebuilding new schools in Knowsley, including the Halewood Centre for Learning. The remaining £60million in Knowsley will see SEN (Special Educational Needs) facilities provided together with primary and leisure facilities. Within Liverpool’s existing schools programme Balfour Beatty will replace the West Derby Secondary School and Ernest Cookson Special School with a new £24million school on a single site. A second project has a capital value of £32million and will replace the Gateacre Secondary School and the Hope Special School.

• Balfour Beatty has been shortlisted on two important health projects within City Region. Balfour Beatty is one of two bidders for the £288million Alder Hey Children’s Health Park, and is one of three bidders shortlisted to build the £400million replacement for the Royal Liverpool University Hospital.

-They do not need to increase their headcount or risk by employing the apprentice directly
-They will be able to achieve their contractual obligations regarding employing local people and apprentices
-They will be able to support Balfour Beatty in their drive to increase the number of apprenticeships
-They can be involved in the recruitment of the apprentices
-Learning programme/apprenticeships will match their business needs.
-All training and assessment with SkillCentres/colleges and training providers is organised.
-Fully-accredited programmes combining on the job learning with skills training
-Flexible delivery to suit their business, e.g. in day or block release.
-Free apprentice recruitment service and reduced training costs for their business.
-Strong support for them and their apprentice.
-A more developed and qualified workforce – (boosting morale and ultimately -building a more competitive business).

• What’s in it for the apprentice?

We work in partnership with our customers principally in the UK, the US, South-East Asia and the Middle East, who value the highest levels of quality, safety and technical expertise.

Our key infrastructure markets include transportation (roads, rail and airports); social infrastructure (education, specialist healthcare, and various types of accommodation); utilities (water, gas and power transmission and generation) and commercial (offices, leisure and retail). We deliver services essential to the development, creation and care of these infrastructure assets including investment, project design, financing and management, engineering and construction, and facilities management services.
Balfour Beatty employs more than 50,000 people around the world.