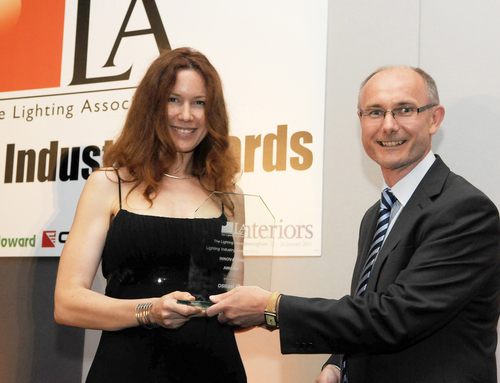 The first annual Lighting Industry Awards, coordinated by the Lighting Association were presented at a gala dinner on 14th July. Industry peers from government, energy companies and universities examined the entries to decide the final winners. Amongst high profile finalists were global names such as Osram and Havells Sylvania, however the biggest winner was the UK based LED luminaire manufacturer PhotonStar LED Ltd. who were finalists in almost all sections , and were the only company to win more than one award.
Dr. James McKenzie, (co-founder and CEO) had been invited to present “A year in LEDs” at the Lighting Association conference running up to the awards. “Our technology was up against a number of other market leading and innovative products from all over the world. We were very proud to see our British technology recognised amongst such serious competition for its innovation and value to commercial applications.”

PhotonStar’s SmartWhite (which had previously been commended in the Lighting design awards 2010), won the E.on award for “Light Source of the Year”. The winning technology is an intelligent, highly efficient, white colour tuneable, LED light source that provides the high colour quality & control suited to innovative, demanding and creative interior illumination grade applications.

SmartNemesis intelligent LED luminaire won the Osram award for ”Innovation”, recognising it for its ground breaking combination of embedded intelligence, source efficiency and functionality to offer 70% greater energy saving than other LED or CFL commercial downlights. SmartNemesis had previously been featured as one 20 of the UKs most significant energy saving products at EcoBuild 2010 in the “Innovation Future Zone”. It is a superior replacement for traditional low glare downlights with dynamic daylight linking. It offers enhanced performance, savings & advanced control with dramatically reduced installation costs and wiring requirements.

The Nemesis LED luminaire (superior replacement for low glare CFL downlights) was recognised as a finalist in the commercial product of the year category. The Nemesis is a commercially successful product that has been installed in a large number of energy saving applications including offices, universities and large retail chains. It is one of the brightest & most reliable products on the market of its type, producing up to 3220 lumens (equivalent to a 2 x 32W (62W) compact fluorescent) and with a life (L70) of 80,000 hours.