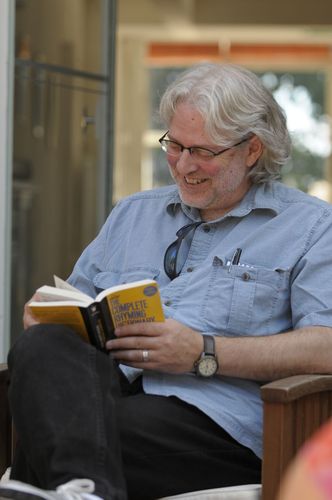 Here, Moira Martingale, a journalist and author who created the French House Party concept of learning holidays five years ago, offers a personal reflection on this unique event.

THE DEATH METAL MOMENT had the potential of being tricky for Dean Friedman to negotiate.

There he was, operating a song-writing course in France, listening to some impressive singing and composition from talented participants who embraced a range of musical genres: folk, blues, jazz, country, ballad, rock and pop.

And among them was Barney Oakley, who also happens to be my son. Not that Barney lacks musical accomplishments – he’s a music student, composes, plays guitar, sings in a band - but the days when he was a cathedral chorister, angelic in soprano white, are far behind him and the electric guitar is a constant, strident presence in our house.

At 18, his musical influences are bands with sinister names like Glamour of the Kill, Bullet for my Valentine and Slashed Throat (OK, I made the last one up). His own band is called Dakota Ruins. He sings, but mostly he screams – or rather, roars fearsomely – and the explicit song lyrics don’t bear inspection. Luckily, they’re usually incomprehensible.

So Barney is sitting out in the sunshine with the other gathered songwriters on Dean Friedman’s course who had all offered up some stunning compositions about love, loss and so on - and Dean was now asking to hear one of Barney’s recordings for his band’s latest CD.

Barney booted up his computer and played “Compliment From a Whore”. It’s complex in melody, structure and tempo, but the vocal is mostly angry shouting and the words unintelligible.

It’s a song which grows on you, actually. When you’ve heard it 200 or so times, as I have.

“Tell us what the lyrics are,” says Dean to Barney.

I already knew what the lyrics were. Dean and the group were wearing polite expressions of respectful anticipation. I made my excuses and crept away.

However, when I returned, post-translation – quelle surprise! No one needed smelling-salts; on the contrary, there was an atmosphere of apparent interest - and an agreement that this Death Metal track was no different thematically from all the angry break-up songs of betrayal and rejection which have inspired creative people since time immemorial. But with added verbal abuse, obviously.

For this, the French House Party’s first songwriting course, we had a great group of participants with diverse styles, all of them respectful of everyone’s individual musical skills. They sang, talked, listened, learned, jammed and gigged together, culminating in the shared performance of a song with Dean Friedman.

Apart from Barney, there was David Gordon, who writes haunting ballads and performs regularly throughout the north-west of England and Sally McDonald, a singer-songwriter who is based in Belgium. Doc Wallace is an Australian blues-rock guitarist and pianist who lives in the UK, and Glaswegian Eric Brooker, now retired, is a pianist who plays in a Ceilidh band and composes quirky songs.

Since a heart attack some years ago, which affected his breathing, Eric had not sung. On this course, wonderfully, he re-discovered his excellent vocals. Finally, Beth Hague, a shy music student, stunned the company with a voice so pure it made the hairs on your arms stand up.

Dean Friedman had slotted this four-day break in Carcassonne into his 40-city UK and Ireland tour schedule - a four-month marathon which ended in mid-October. The day after the French course ended, he headed up to Scotland for his now-regular appearances at the Edinburgh Festival.

Dean is an unusual man. Given that he has spent 30-odd years navigating - and sometimes treading water in - the narcissistic maelstrom of rock and pop stardom, his ego appears to take second billing to his professional passions.

Acknowledged as one of the best lyrics-and-melody composers in the industry and with a perfect, instantly-recognisable voice which is still able to soar to the high notes of his hit songs like "Ariel" and "Lydia", if the Friedman personality contains any arrogance, he has it well-shackled in a cellar somewhere.

Both on stage and in the intimate setting of the songwriting course, his mode is genial, agreeable, witty and laidback. Well-mannered in the extreme, he is immensely likable, with that priceless gift of being a generous listener who makes the speaker feel their ideas – whether spoken or in song - are of value.

This quiet confidence and modest demeanour may, of course, have something to do with Friedman’s mellow age (he is now in his 50s) and the cruel lessons learned from life in the fickle music business, in particular at the hands of the record company with whom he had struck a Faustian pact when he was a very young man.

Friedman was barely into his 20s when, after the meteoric success of his singles and albums, he hit the buffers by becoming one of the legion of artists who decide to sue their record companies. The final clincher which prompted Dean into such drastic action was the enormous UK success of “Lucky Stars” from which he earned next-to-nothing while his record company banked enormous profits.

Someone once described the relationship between the recording industry and the artists whose talents keep them in Cartier watches as “an unholy arranged marriage that always ends with a bitter musical bride” and so it proved in Friedman’s case.

This kid was no match for the might of his record company with its layers of lawyers and, he says, “I've got a gold record and a framed 'bankruptcy' certificate hanging on my wall to prove it.” He also lost the copyrights to all his early hit albums and singles – an injustice which has hit many, many recording artists.

At about the same time in the UK there came the blow of the BBC banning his single “McDonald’s Girl” because it contained a trade-name (quirkily, the single later went to Number One in the Norwegian charts).

Effectively out of the record business, Friedman picked himself up, dusted himself off and began exploiting his other media skills – inventing the very first virtual reality computer game, then further games for the US children’s TV network Nickelodeon, for one thing.

He wrote a book about synthesisers. His company, InVideo began to market his invented giant musical playground instrument installations which can be seen in science museums and theme parks internationally. He composed soundtracks for film and TV series, such as Boon. He continued to write songs. And he did the odd live gig, of course.

Then came the internet, and everything began to change. Suddenly record companies’ power became depleted as the escaped artists realised that an independent future was beckoning. Not only were they able to perform to a worldwide audience via a computer interface, they were also able to address directly their faithful followers by emails and blogs.

Friedman was one of the first artists at the fin-de-siecle to suggest that his devotees might pledge small sums of cash in order for him to record an album, with the promise of signed copies when the album was produced. Within a matter of weeks, he had the $25,000 he needed to pay studio, production and distribution costs.

“That was amazing,” he says. ”And the idea of supporting and buying product direct from independent artists, by-passing the record industry with its A&R men, flocks of lawyers, distributors, retailers and the other industry middlemen who typically stand between a recording artist and their listening audience – what a concept!

“Plus, it enabled artists to actually see some money for their efforts. I made more from selling 5,000 of that independent album than I did for selling one million records in the major label system.” Which meant that Friedman was able to respond to repeated requests from his fans and start seriously touring again.

Since the 1990s he has scheduled an annual UK and Ireland tour, performing at venues which are not always as sizeable as in the days when “Lucky Stars” was at number 3 in the charts and the groupies were blocking the stage-door exit, but which are perfect for the intimate rapport which he maintains with his audience.

He has a great deal of time for his followers and appreciates their loyalty: after every gig he spends an hour or so chatting, signing albums and so on. Just a regular guy – or as he says in one of the numbers from his latest album, “Submarine Races”, a “Lucky Guy”.

This positive outlook perhaps explains why he was undaunted at the idea of living for four days at the French House Party venue with a group of songwriters who held him in high esteem.

Participant Doc Wallace, who has written for rock bands, stage musicals and adverts, said that Friedman remains a major inspiration to him over two decades, so the course had promised to be “the opportunity of a lifetime” – but turned out to be much more: “It was an unforgettable experience from which I have taken more than I could have asked, and which has helped me more than I could have hoped,” he said.

Other comments from participants were “the whole weekend was heavenly” (Sally) and “a very uplifting experience” (David). Eric commented: “It's not often I can say that I've had a peak experience in my life, but that's another one!”

And Dean’s verdict? “Wonderful - it was a real pleasure and I’m looking forward to the next time”. Which, as it happens, will be from Friday 29 July to Monday 1 August, 2011.

And has the songwriting course turned my own Death Metal freak away from the dark side? Well … not exactly, but apart from an increased respect for the skills involved in producing music which is less extreme than his own, Barney did rather adore Dean.

In fact, he was listening to a track from a Friedman album in the car only the other day. “These lyrics are so clever,” he remarked.

“And they don’t even contain the f-word,” I said.

A video of Dean Friedman’s songwriting course can be seen on http://www.youtube.com/watch?v=nEbJnVChN1k.

To reserve a place on the 2011 course, contact Moira Martingale on enquiries@frenchhouseparty.co.uk