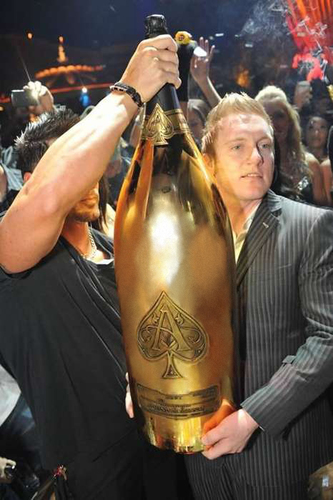 Ranked the number one Champagne in the world in a blind-tasting of over 1,000 brands, Armand de Brignac exemplifies unmatched winemaking expertise

Armand de Brignac has released the largest bottle of luxury Champagne in existence: the stunning “Midas,” a massive 30-litre vessel equivalent to 40 regular-sized 750ml bottles and weighing 100 pounds. The bottle’s name, Midas, comes from King Midas, remembered in Greek mythology for the ability to turn whatever he touched to gold.

Champagne bottles of this size were banned for 75 years beginning around the turn of the 20th century, until glassmaking techniques made bottles safe from explosion due to the pressure of a large volume of Champagne in a single vessel.

Armand de Brignac is the luxury Champagne from the award-winning Champagne Cattier chateau of Chigny-les-Roses, France. Instantly identifiable by the dramatic Ace of Spades insignias on its bottle, Armand de Brignac boasts three prestige cuvées - Brut Gold, Rosé and Blanc de Blancs. Ranked the number one Champagne in the world in a blind-tasting of over 1,000 brands, Armand de Brignac exemplifies unmatched winemaking expertise and a true passion for the art of Champagne.

Since 1763, the Cattier family has owned and cultivated vineyards in the prestigious Montagne de Reims terroir of the French Champagne region. “Our Champagne is produced from grape to glass through traditional hand labor-intensive methods. It is aged in a gated section of the cellars considered one of the deepest in Champagne” stated family patriarch Jean-Jacques Cattier. He and his son, Alexandre Cattier, along with only eight others, produce the Champagne. Each cuvée includes a unique liqueur de dosage aged up to five years in oak casks, ensuring that every bottle of Armand de Brignac is of superior and unmatched quality.

Each metallic bottle, inspired by famed fashion designer André Courrèges, is crafted entirely by hand; each bears two Ace of Spades insignias and four hand-applied pewter labels. The striking bottle is housed in a black wooden case embossed with the Champagne’s royal crest. Each box is lined in velvet and fitted with an engraved nameplate, reflecting the splendor and grand style of the French fashion world and perfectly complementing the Armand de Brignac Champagne within.