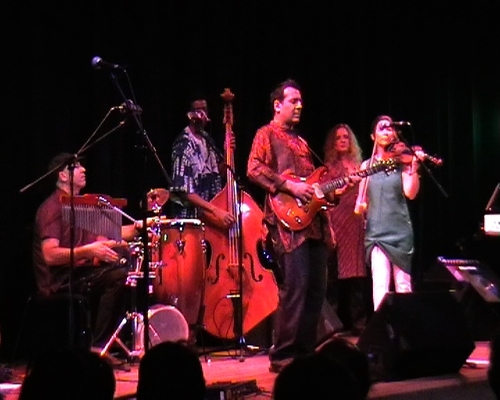 Berakah is a wonderful and much needed venture. What better way than music to move the soul and bring souls together

Berakah - a blessing in Arabic and Hebrew

Popular multi-faith band, Berakah, will launch its new album/CD at the start of its UK tour. Their first concert will be at St. Paul’s Church in Covent Garden (12 & 13 Feb).

Berakah is a multi-cultural, multi-ethnic band comprised of musicians from various faith and ethnic backgrounds including Muslim, Jewish and Christian. The acclaimed band was set up by Mohammad Nazam, a talented Pakistani-born jazz and rock guitarist with a passion for music and a vision of creating a multi-faith band.

The music effortlessly combines Soul, Gospel, Classical and Middle Eastern music styles with jazz themes. The resulting repertoire is fresh and unexpected. Berakah has a passionate following, with audiences as diverse as its band members and concerts which often end with standing ovations. Over the years the band has played to capacity audiences in churches, synagogues and national venues across the country, including a sell-out concert at London's Purcell Room, billed as 'gig of the week' by the Metro.

Writer and broadcaster Yasmin Alibhai-Brown will introduce the concert on 13 February. She says: "There is nothing 'worthy' about Berakah. The music enchants and takes you away to experiences you cannot predict or prepare for – it is funky and spiritual, sweet and rebellious, infinitely open but defiantly itself. It has a higher purpose too. It is a riposte to joyless fundamentalisms, and an exquisite form of resistance.” Rabia Malik, the Chair and Trustee of City Circle, will introduce the band on the opening night. She says: “Berakah is a wonderful and much needed venture. What better way than music to move the soul and bring souls together.”

“The three Abrahamic faiths all come from the same historic origins and so share many themes. At the heart of all faiths and belief systems is peace, harmony and shared humanity. That's the basis of what Berakah does," says Mohammed Nazam, who has been a musician and composer for more than 20 years. "Music has long been recognised as a unique way to bring people together and a powerful driver for social change."

The Times wrote about one of Berakah's performances: 'It is music to make you close your eyes and dance in your head - an arresting confection of jazzy improvisation, catchy Middle Eastern chords and the beat of the darbuka drum.'

Photographs of the band are available on request


Notes to editors: about Berakah

The new album - ONE RAY OF LIGHT
Running order:

Berakah is a World Music not-for-profit ensemble, featuring musicians from Muslim, Jewish and Christian backgrounds. The aim of the group, founded in 2005, is to use music to bring people together in a spirit of peace, highlighting the importance of culture in building bridges. Berakah has been performing extensively across the UK, at Bradford, Luton and Liverpool among others, at major concert venues and festivals since its inception.

Berakah’s first debut album, "Music for The Heart", can be purchased from the website http://www.theberakahproject.org


About The City Circle
The City Circle is an open circle for open minds where individuals are pushed to think outside the box. For over a decade it has provided a safe space for communities to self-critically discuss and debate issues that have concerned them. It has been open to the public, all shades of Muslim and non-Muslim opinion have been welcomed. Whatever your faith and whatever your politics, the City Circle remains a home for everyone. We are an independent, indigenous and inclusive space.

We believe people should be free to develop their own ideas at their own speed. The City Circle offers no doctrinal solutions but instead a space to explore new ideas and a place to ask questions: to challenge and be challenged. That is how we believe creative, confident and dynamic communities develop.

The City Circle runs a number of targeted community based projects to improve the life chances of those around us. We do so by harnessing the skills and talents of Muslim professionals. The City Circle is a registered charity (reg. no.1088931). www.thecitycircle.com

This press release was distributed by ResponseSource Press Release Wire on behalf of Moonlight Media in the following categories: Entertainment & Arts, for more information visit https://pressreleasewire.responsesource.com/about.