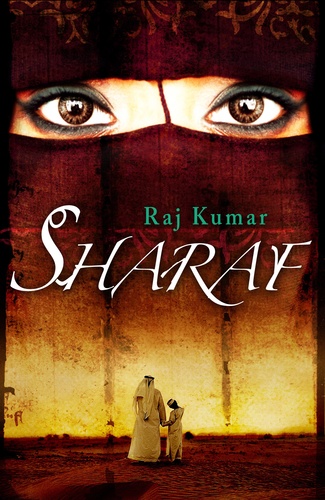 Hailed by bestselling author Jean Sasson (Princess, Daughters of Arabia) as a “powerful and compelling book”, published today is Sharaf ('honour') by Raj Kumar which lifts the lid on aspects of Saudi Arabian life and culture. Unafraid to deal with themes involving arranged marriage, honour killing and fundamentalism the author has chosen to remain behind a pen name.

Based on the author's experiences living and working in Saudi Arabia, Sharaf is a debut novel steeped in realism and follows the family conflicts and terrible choices that face Maryam and her father Farhan, a general loyal to the army. Maryam loves her family, her Arabian heritage and is loyal to Islam, but she falls in love with Joe, an American dentist and a Jew. Farhan is proud of his daughter's education and independent spirit but presses ahead with her betrothal to the son of an old army comrade. Maryam and Joe continue their relationship in secret but then Joe draws the attention of the Muttawa, the feared religious police.

Raj Kumar no longer lives in Saudi Arabia but his respect and fascination for the country and its people inspired Sharaf.