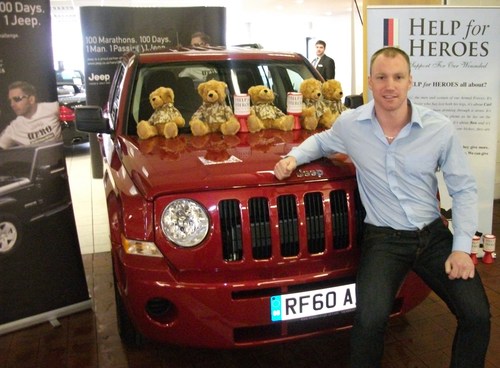 In 2010 Jeep sponsored Ultra Marathon Athlete came together to raise money for Help for Heroes by giving away a Jeep Patriot 2.4ltr Sport Manual and in the process raised a staggering £67,000 for the Wiltshire based charity set up 3yrs ago by Brynn & Emma Parry after they saw the injured soldiers coming back from Iraq.

The 2010 prize draw was a nationwide prize draw that also followed Mike Buss around the UK on his HERO 100 marathon world record where he clocked up 100 marathons in 100 days.

The members of the public were invited to enter a txt service prize draw to win the Jeep Patriot worth over £17,500 for just £1 plus their network standard rate.

The winner who collected his Jeep Patriot on Thursday 3rd March was Dave Clifford from West London who had attended the Leisure Industry Show at the Birmingham NEC in September 2010 and was totally shocked to find out that he had won!

Mike officially handed over the keys to Dave at lunchtime on Thursday who couldnt wait to hit the road in his new car...

Mike also had another job to do which was to officially launch the 2011 Jeep for HEROES Prize Draw which this year aims to raise £250,000 for Help for Heroes and three other forces charities.

Just txt one of the above options to 60777 which will cost you £1 plus your normal standard txt rate.

If you wish to arrange an interview with Mike Buss or are a business interested in sponsoring Mike then please contact Mikes agent Marcus Chidgy on: 07736 068 320 or go to www.captiveminds.com