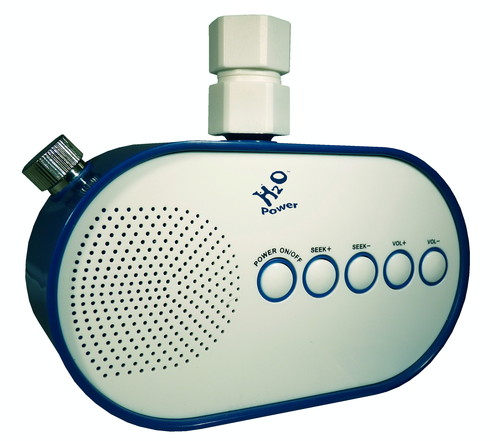 Using a patented micro turbine concept, the FM radio is powered solely through the motion of water flowing through a small H2O™ micro turbine

The team that helped commercialise the award winning Wind-Up Radio has launched the world’s first water powered radio; a product that uses the water pressure provided by household showers to power an FM radio, without the need for disposable batteries.

The H2O™ Shower Powered Radio provides users with a convenient, and energy-efficient, means of listening to their favourite radio stations whilst in the shower. Using a patented micro turbine concept, the FM radio is powered solely through the motion of water flowing through a small H2O™ micro turbine; driving a generator that creates energy to power the radio. The radio dispels the need for disposable batteries, as the integral battery recharges as the shower runs.

Turning on automatically when the shower is used, the H2O™ Shower Powered Radio memorises the last chosen radio station and speaker volume. The radio even allows users to carry on listening after the shower is turned off; using any excess energy stored in an integral Ni-Mh rechargeable cell.

Installing the H2O™ Shower Powered Radio is simple, with no need for tools. The small, slim design slots directly on to the faucet of the shower; placing the radio in a position to use the steady flow of water on its way to the shower head, without impinging or getting in the way of the shower user. The radio is also waterproof, receiving a waterproof rating of IP44, and so complying with industry standards.

The patented H2O™ micro turbine technology is the latest technology from the H2O™ design labs. Previously, Vivian Blick, Managing Director of Tango Group, the owners of the H2O™ brand, the company behind the radio, showcased the H2O™ brand and its first generation of products on the hit BBC television series Dragon’s Den.

Inventor Vivian Blick is also a former director of Freeplay Energy Group, the company behind the commercialisation of the Wind-up Radio, which was invented by Trevor Baylis OBE in the 1990s.

The Wind-up Radio was invented in order to help raise awareness of AIDS in Africa, where the cost of batteries or electricity made radios expensive or too difficult to access. In June of 1996 the Freeplay radio was awarded the BBC Design Award for Best Product and Best Design, and in October 1997, Trevor was awarded an OBE by The Princess Royal at Buckingham Palace in relation to the product.

Vivian Blick, Managing Director of Tango Group, the owners of H2O™, had the following to say about the launch of the H2O™ Shower Powered Radio:

“Having seen huge success with the commercialisation of the Wind-Up Radio; we were constantly looking into new ways that further innovations in the radio sector could be made. Creating the now-patented micro turbine technology, that allows the radio to operate solely through the flow of water, was the key to our new innovation; and thus the world’s first water-powered shower radio was created.”

“We are extremely excited about the launch of the H2O™ Shower Powered Radio; particularly given its presence as the only radio of its kind available on the market. The radio gives users a unique means of listening to the radio in the bathroom, without having to worry about the inconvenience that disposable batteries can cause. With the clear sound, and excellent reception that the radio enjoys; we hope to encourage singing in the shower all around the UK.”

For more information, or to request samples of the H2O™ Shower Powered Radio, please contact Emma Kent of 10 Yetis Public Relations on emmak@10yetis.co.uk or 01452 348211. Alternatively, if you have any stockist enquiries, please call Tango Group on 01452 621888.

Samples of the H2O Shower Powered Radio are available for review. If you require a sample, please get in touch.

The H20™ Shower Powered Radio is a product that uses the water pressure provided by household showers to power an FM radio; and is the first of its kind in the world.

The radio will work with 99.9% of all household showers.

To find a list of stockists please visit www.tangogroup.net . Alternatively, you can purchase the H20™ Shower Powered Radio here: http://shop.tangogroup.net/detailsT.asp?productid=572

Tango Group Ltd is the owner of the H20™ brand.