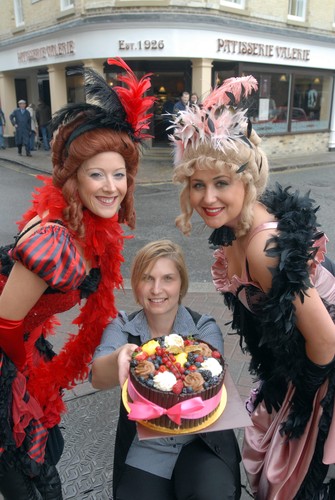 Fast growing Patisserie Valerie has been creating an average of 20 – 25 new jobs a week with a fusillade of new openings in Windsor, Manchester and Liverpool in March alone. These come hard on the heels of a year of new openings in which the Company has broken out of its London base and become a truly national presence on High Streets.

Late April/early May sees further openings in Chichester and Henley.

In 12 months, the number of outlets has grown by 50% - with no signs of any slackening in the pace of expansion.

The openings are part of a rapid expansion for the Company which has already seen thousands of new customers and businesses try its clever combination of early morning breakfasts, delivered catering, wedding cakes and a dazzling array of indulgent offerings.

This combination has seen the chain carving out a high street niche not met by traditional coffee house chains or cake shops - with plans to continue this expansion for the rest of this year and next.

In February, a new patisserie in York became the most northerly opening for the Company. In Liverpool, the outlet based in the Metquarter reported queues into the street in the first few days after opening and it is receiving more discrete visits from local celebs.

Patisserie Valerie’s Chief Executive Officer Paul May said,
“Despite the current climate of doom and gloom, we have been able to bring investment and new jobs to the UK’s high streets. If anything the enthusiasm of the public has taken us by surprise.

In the areas where we have opened already, customers have commented that it was great not have to trek into London to find a Patisserie Valerie, but have one in their own area.

Some might find this enthusiastic reaction surprising – after all we keep being told that shopping is in decline and that retailers are struggling to find enough customers.

This is not our experience however. In times of recession, people need an affordable treat to cheer themselves up – and when things are going well, they want to celebrate.

We provide a dazzling array of pure indulgence in the form of our delicious cake range, but we do not neglect the basics of breakfasts, lunches etc matched with quick and excellent service. Many business breakfast clubs use our facilities early in the mornings for example.

We provide businesses with a delivered catering service and at the other extreme, decorated wedding cakes.

All of this puts us in a different market place from any other operator. This is why we have been able to add so many new customers in the last year – and provide much needed jobs.

We really believe that we are helping to add to the shopping experience and entice shoppers.”

Founded in 1926 by a Belgian - Madame Valerie, Patisserie Valerie has, over the years welcomed many celebrities though its doors where they and others can indulge themselves, whilst watching the world go by.

For more details of why Patisserie Valerie is so popular, go to www.patisserie-valerie.co.uk.

File Photo attached shows the Patisserie Valerie girls whose appearance at new openings has been a feature.