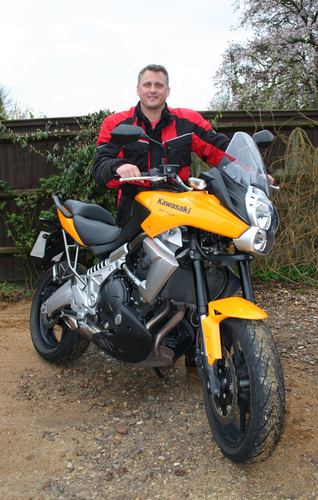 Cricketing superstar, Darren Gough, has taken to two wheels with the same enthusiasm and dedication that saw him become one of England’s most successful wicket takers of recent times.

The former International cricketer has attracted a legion of new fans in the recent past having won the BBC’s hugely popular Strictly Come Dancing on two occasions, once as series winner and then again as overall victor in a Christmas special.

Having decided to take to two wheels, 40 year old Gough teamed up with the Motorcycle Industry Association’s GetOn campaign, an initiative designed to attract new riders to motorcycles and scooters and guide them through all aspects of machine choice, appropriate clothing, insurance, finance and training.

Choosing the same machine as that of his riding instructor, Gough has now taken delivery of a 650cc Kawasaki Versys for which he already has ambitious plans.

“My afternoon radio show for Talksport means I quite often have to get into central London at short notice and then return home during the rush hour”, said Gough. “With no congestion charge to pay, and free parking just outside the Talksport studios, the Versys makes perfect sense while being great fun to ride”.

Attending an advanced riding course at his local motorcycle training centre the same day his Kawasaki was delivered, Gough’s competitive streak came to the fore and resulted in top marks for his riding appraisal.

“The Versys has a great riding position and I know the way it responds will be great for me on my commutes into town and riding around the country lanes in Buckinghamshire where I live”, concluded Gough who’s next challenge will be a gruelling motorcycle ride in Africa organised by the GetOn campaign in support of the Riders for Health charity.