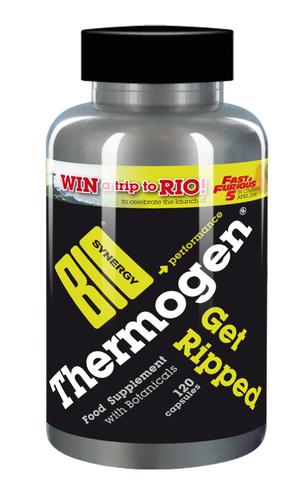 Get Ripped for Rio

This spring Bio-Synergy (the UK’s No.1 sports supplement company) is delighted to have joined forces with Universal Pictures and their new movie Fast & Furious 5 to run an exclusive on-pack promotion on the new Bio-Synergy performance range. The promotion will give participants the chance to win a once in a lifetime trip to Rio de Janeiro, plus many other exclusive prizes.
This ultimate action thriller hits our screens April 21st 2011! Vin Diesel and Paul Walker lead a reunion of returning all-stars from every chapter of the explosive franchise built on speed in Fast & Furious 5.
Exclusive Fast & Furious 5 images will adorn products within the new high octane and explosive performance range, including Thermogen, NO2 and Kre-Akalyn which are set to get you pumped and working at your optimum, just like your favourite action hero! The new products are available online with Amazon, Littlewoods and the Bio-Synergy website.
Prizes include a once in a lifetime 5-day trip for two people to exotic Rio de Janeiro! This ultimate trip includes a four night stay in a 4-star hotel, with a romantic dinner for two at the luxurious restaurant Cahacaria Mangue Seco. Also included is an exclusive Caipirinha cocktail lesson – the restaurant’s speciality and the nation’s favourite drink. The winners will be given the complete VIP experience in Rio’s Lapa District at the exclusive Rio Scenario with personal chaperones and complimentary drinks. Runners up will also have the chance to win exclusive driving days and Fast & Furious 5 movie merchandise!
Notes to Editor:
Bio-Synergy – is one of Britain’s most innovative and popular sports nutrition companies. Over the past 13 years, the brand’s products have won awards and been given the highest ratings by publications including Slim at Home, Body Fit, Daily Mail, News of the World, Daily Telegraph and Men’s Health, to name just a few.

Fast & Furious 5 - Vin Diesel and Paul Walker lead a reunion of returning all-stars from every chapter of the explosive franchise built on speed in Fast & Furious 5. In this instalment, former cop Brian O’Conner (Paul Walker) partners with ex-con Dom Toretto (Vin Diesel) on the opposite side of the law. Dwayne Johnson joins returning favourites Jordana Brewster, Chris “Ludacris” Bridges, Tyrese Gibson, Sung Kang, Gal Gadot, Matt Schulze, Tego Calderon and Don Omar for this ultimate high-stakes race.
Since Brian and Mia Toretto (Brewster) broke Dom out of custody, they’ve blown across many borders to elude authorities. Now backed into a corner in Rio de Janeiro, they must pull one last job in order to gain their freedom. As they assemble their elite team of top racers, the unlikely allies know their only shot of getting out for good means confronting the corrupt businessman who wants them dead. But he’s not the only one on their tail.
Hard-nosed federal agent Luke Hobbs (Johnson) never misses his target. When he is assigned to track down Dom and Brian, he and his strike team launch an all-out assault to capture them. But as his men tear through Brazil, Hobbs learns he can’t separate the good guys from the bad. Now, he must rely on his instincts to corner his prey…before someone else runs them down first.