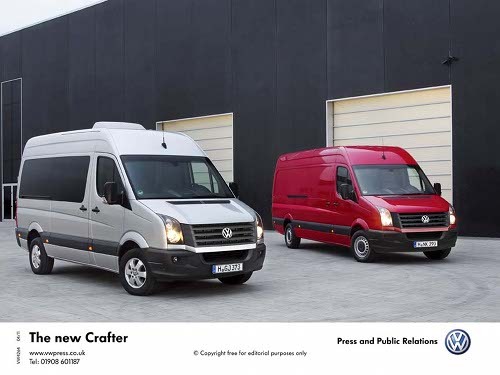 Five years after the Crafter made its world debut at the Commercial Vehicle Show, Volkswagen Commercial Vehicles is delighted to announce early information about a new Crafter ahead of its start of production later this summer.

First details indicate the new Crafter will cause a revolution in the large van market with increased payloads and improvements in efficiency, emissions and running costs.

Power outputs will compare with the current engine range, but with increased torque and efficiency, Volkswagen expects them to set new class standards for emissions and running costs in the large van sector. Initial engine data suggests the new Crafter could produce emissions from as low as 195 g/km.

The 2.0 TDI engines are already proven in the new Amarok pick-up, Caddy and Transporter and have been praised for their refinement and efficiency. This engine is expected to reduce fuel consumption and emissions figures for the new Crafter by up to 33 per cent. Running costs could also be reduced by up to 25 per cent thanks to better fuel consumption and lower servicing costs. Later this year, Volkswagen BlueMotion Technology combined with a Start/Stop system and battery regeneration is also expected to be introduced for the new Crafter. Weight savings from the new engines, along with other technical modifications, will allow payload increases.

Changes to the exterior of the new Crafter are limited to the front grille which is refreshed in line with the modern Volkswagen design DNA to emphasis its horizontal lines. The interior will feature various modifications to details including new upholstery and redesigned instruments.

‘The Crafter is already great to drive, has plenty of carrying ability with good environmental credentials, so enhancements to running costs and payloads are guaranteed to prove very successful and attract new customers,’ said Matthew Bowden, Head of Operations, Volkswagen Commercial Vehicles.

Prices and full UK specifications will be confirmed before the launch of the new Crafter this summer.

Notes to editors: Electronic images are available to accompany this release from Newspress or www.vwpress.co.uk. For more information, please contact John Rawlings, Press and Public Relations Manager, Volkswagen Commercial Vehicles on 01908 601478, 07872 379544 or john.rawlings@vwcv.co.uk.