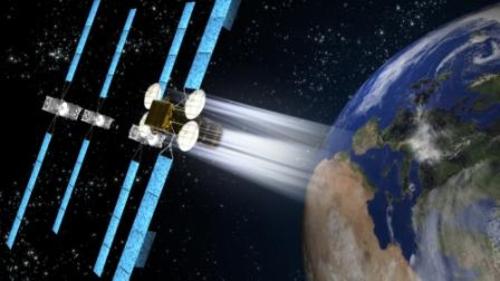 Eutelsat Communications (Euronext Paris: ETL) today announced a new contract between its broadband subsidiary, Skylogic, and UK satellite communications specialist, Avonline, to sell broadband services in the UK via KA-SAT, the first European High Throughput Satellite. The contract, valued at up to €5 million, will allow Avonline to sell Eutelsat’s next generation Tooway™ satellite broadband service. With download speeds of up to 10 Mbps and upload speeds of up to 4 Mbps, Tooway™ satellite broadband will bring fast, reliable and affordable Internet access across the UK, including rural not spots and areas with poor ADSL and mobile broadband coverage. Currently more than one in ten UK households is unable to receive a 2 Mbps broadband connection – the minimum target requirement set by the UK Government.

Avonline is one of the UK’s leading digital and broadband installation companies, with a team of approximately 400 engineers delivering high quality services across the UK and Ireland. The company has been involved in satellite broadband for almost a decade and has been the UK’s largest provider of Tooway™ services in the UK over the past two years.

The next-generation Tooway™ service will be delivered via Eutelsat’s innovative KA-SAT satellite, which was launched in December 2010 and is on track to go into full commercial service mid-2011. With its total capacity of more than 70 Gbps, KA-SAT ranks as the world's most powerful spacecraft and, as Europe's first High-Throughput Satellite (HTS), will usher in a new era of competitively-priced satellite-delivered services for homes and small businesses across Europe and the Mediterranean Basin. The satellite forms the cornerstone of a new European satellite infrastructure which includes eight main satellite gateways across Europe connected to the Internet by a fibre backbone ring.

Mark Wynn, Avonline Managing Director, said: “Avonline has been at the forefront of UK satellite communication solutions for the past ten years, and we are delighted to be the first major UK satellite services provider to sign a contract for the next-generation Tooway™ satellite broadband service. With speeds of up to 10 Mbps covering 100% of the UK, this service will ensure that everyone who wants a fast and reliable broadband connection can now get connected. This is great news for people living in rural areas without a decent broadband connection or for people who are too far from the exchange to get a fast, consistent broadband service. It will also be a great boost to small businesses and for those who work from home. With Tooway™, they will now be able to take advantage of broadband services with similar speeds and prices to their urban counterparts.”

Arduino Patacchini, CEO of Skylogic added: “KA-SAT brings a new era of European satellite communication services which will challenge traditional perceptions about the speeds and cost of satellite broadband services. We are delighted to be working with Avonline to help bring our enhanced Tooway™ services to UK homes.”

Eutelsat’s Tooway™ broadband solution consists of a small satellite dish and a modem connected to the PC via the Ethernet, giving customers immediate broadband access following a simple installation. In addition, the Tooway™ service has the ability to deliver Voice over satellite telephony services and Direct-to-Home television using the Tooway™ dish.

For further details on the Tooway™ service from Avonline visit: www.toowayonline.co.uk

Avonline plc is one of the UK’s leading Installation and Business Services companies. Established in 1981, the company employs around 400 engineers installing and supporting broadband and digital services to customers across Europe. Avonline has a specialist division deploying broadband satellite solutions to consumers and business customers. Avonline’s Satellite Broadband services span from individual satellite broadband connections through to high speed networks supporting VPN, VoIP, video and broadband data for enterprise customers. Avonline actively supports the UK Government’s Digital Inclusion policies, is a partner of the Race Online 2012 initiative and is supporting the Welsh Assembly’s Broadband Support Scheme.

Eutelsat Communications (Euronext Paris: ETL, ISIN code: FR0010221234) is the holding company of Eutelsat S.A.. With capacity commercialised on 27 satellites that provide coverage over the entire European continent, as well as the Middle East, Africa, India and significant parts of Asia and the Americas, Eutelsat is one of the world's three leading satellite operators in terms of revenues. At 31 December 2010, Eutelsat’s satellites were broadcasting more than 3,700 television channels to over 200 million cable and satellite homes in Europe, the Middle East and Africa. The Group’s satellites also serve a wide range of fixed and mobile telecommunications services, TV contribution markets, corporate networks, and broadband markets for Internet Service Providers and for transport, maritime and in-flight markets. Eutelsat's broadband subsidiary, Skylogic, markets and operates access to high speed Internet services through teleports in France and Italy that serve enterprises, local communities, government agencies and aid organisations in Europe, Africa, Asia and the Americas. Headquartered in Paris, Eutelsat and its subsidiaries employ 683 commercial, technical and operational employees from 28 countries. www.eutelsat.com www.tooway.com