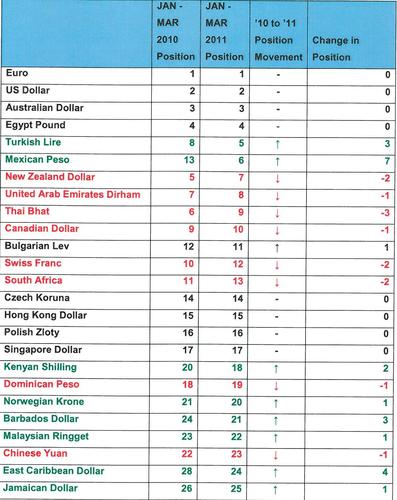 • Mexico popularity increases amongst holidaymakers by 168 per cent in first quarter of 2011
• Currency volumes for Turkey also increases by 115 per cent
• Recent holiday favourite Egypt, temporarily falls 50 per cent due to local conflict

All-inclusive holiday destinations, such as Mexico and Turkey, are proving to be favourites amongst Britons this year, according to data released today.

The American Express Global Foreign Exchange Services Currency Index, which tracks the top 25 currencies for British travellers each quarter, reveals a 168 per cent increase in currency sales for the Mexican Peso in the first three months of 2011 compared to the same time last year.

Mexico has climbed the currency index seven places to be in sixth place of the top selling currencies. This shift has seen holiday hotspots such as United Arab Emirates, New Zealand and Thailand drop down the table; each slipping down by one, two and three places respectively (see table below). Turkey climbed three places to fifth place, with an increase in volume sales of 115 per cent compared to the same quarter in 2010.

Terry Perrin, Director at American Express Global Foreign Exchange Services said: “Not only do Turkey and Mexico offer favourable exchange rates for the pound, they are also well-known all-inclusive destinations. The ‘all-inclusive’ holiday trend has increased in recent years as holidaymakers, especially families, like to plan their spend ahead of time. Therefore, locations like Turkey and Mexico offer the best of both worlds for a lot of Britons.”

Egyptian Uprising – short term effect
Despite the local conflict in Egypt having an immediate impact on currency volumes in February (bringing a drop of around 50 per cent), the brief decline in confidence was not enough to have a lasting effect. Over the quarter as a whole the currency rallied in popularity meaning that Egypt remained in fourth position on the league table.

Travel search site, KAYAK supports these findings. Annie Wilson, UK Country Manager, KAYAK said: “Similar to this data, we have seen a 38 per cent increase in searches for Turkey in recent months. Now, as we have entered the longest Bank Holiday season in the UK for nearly ten years, we expect to see an increase in searches for mini-breaks in the coming weeks.”

- American Express offers foreign exchange services to customers at 11 international airports worldwide. This includes eight airports across Europe, with 55 conveniently located foreign exchange offices, open from 4am to 11pm, 365 days year.
- American Express Global Foreign Exchange Services is part of American Express Global Business Travel, and offers a number of business to business services alongside it’s on-airport retail service;
o Wholesale Currency Services – our Wholesale business is an important player in the wholesale banknote industry. We have contractual relationships to buy and sell currency with major banks and organisations throughout Europe and Asia.
o FX International Payments – our FX International Payments business provides a solution for SME and Corporate customers to make international business to business payments via an online solution (available currently in the UK, US, Australia, New Zealand and Singapore)