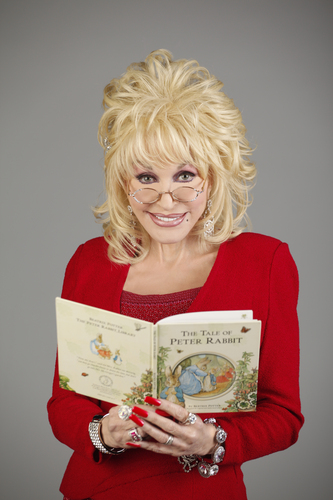 A unique survey into the reading habits of pre-school children enrolled in Dolly Parton's UK Imagination Library, one of the world’s largest free book gifting programmes, has revealed that receiving the books through the scheme is dramatically increasing the reading habits of entire families.

Through the Imagination Library under-5s receive a free age appropriate book, delivered directly to their home each month, from the time they are born until they reach the age of five.

The survey of 500 families showed that time spent reading by everyone in the family had increased since their children became part of the scheme, with grandparents, fathers and mothers and older brothers and sisters all getting the reading bug.

Results of the survey also showed that mums take the lead in reading to their children, with almost all (98 per cent) of the children being read to by their mothers. Dads come next with four out of five (80 per cent) taking part in sharing stories from the Imagination Library. Grandparents, brothers and sisters are also getting involved, with 40 per cent and 25 per cent respectively, regularly reading books to children enrolled in the scheme.

Commenting on the results of the survey Dolly Parton said: “I'm thrilled to see that entire families are enjoying reading books from The Imagination Library. From Grandmas and Grandpas to older brothers and sisters it is great to see that everyone is playing their part to help kids develop a love of reading from the earliest age possible.”

Clare Walter, Mother of Ruby aged 5, from Nottingham, who is enrolled in the Imagination Library said: “The books Ruby has from the Imagination Library have had an amazing effect on our family. Receiving her own book in the post has helped her to develop a real excitement for books, which inspired her to want to learn to read them for herself. This has given Ruby a brilliant head start in reading, but they have also encouraged the rest of our family to read more too. Everyone in the family, from her older sister to her grandparents, has thoroughly enjoyed reading the stories to her.”

Receiving books from the library is also having an impact on the TV viewing habits of its members, with parents reporting that their children are watching 25 per cent less TV than they did before being joining up.

Marc Lambert from the Scottish Book Trust said; “These findings demonstrate once again that reaching out to parents and children both with the message about reading, and with reading materials of the highest quality, make a huge positive difference in what happens in the home, leading to benefits right across the board. Children benefit hugely as numerous studies including this one show, access to books and stories increases educational attainment, socialisation and strong child-parent/grand-parent and sibling bonding. It is wonderful also to read what an effect this provision by the Imagination Library has on a parent’s own reading habits! Furthermore, the programme leads to a stronger engagement by families in their local library which now, more than ever, is to be applauded and welcomed.”

Dolly Parton launched the scheme in her home county of Sevier, Tennessee, in 1996. The scheme works by local sponsors paying for children in their community to receive the books. In 2007 Rotherham Council became the first UK sponsors to join the Imagination Library, which is part of Ms Parton's umbrella charity, the Dollywood Foundation, with more communities signing up in the past 3 years. Over 600,000 books are delivered to children each month across the USA, Canada & UK, while more than 30 million books have been distributed globally since the charity was founded.

Anyone wishing to find out more about how they can work with the Imagination Library and bring it to pre-school children in their area should visit www.imaginationlbrary.com/UK,
contact: nturnbull@imaginationlibrary.co.uk or call 07984 346 592.