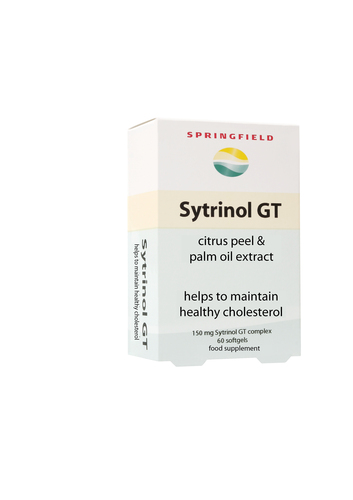 With more and more people noticing the side-effects of taking statins, alternative solutions to lowering cholesterol are becoming more popular than ever. Now Springfield Nutraceuticals have launched new Sytrinol GT - a patented complex of polymethoxylated flavones (PMF’s) from dried citrus peels and tocotrienols from palm oil that is able to affect the body’s endogenous (internal) synthesis of cholesterol. As over two-thirds of the body’s cholesterol is synthesized internally this is considered to be a very important factor.

A study, recently published in Nutrition Research, suggests that consumption of concentrated orange juice (known to contain high levels of flavonoids) may reduce levels of LDL cholesterol in people with high cholesterol levels.

The researchers reported that orange juice consumption has become a worldwide dietary habit, and stated that the consumption of concentrated juice has increased steadily over the years.
Concentrated juice is known to have a greater flavonoid content, such as polymethoxylated flavones (PMF), hesperitin and naringin, when compared to fresh orange juice.
Such differences are due to the manufacturing process which uses the entire fruit to produce concentrated juice, therefore pectin and essential oils contained in the peel are also found in concentrate.

The formulation in Sytrinol GT contains powerful natural compounds that provide antioxidant effects in the body as well as assist in the reduction of cholesterol. The mix of PMF’s from dried citrus peels and tocotrienols from palm oil is proven to be more effective than most of the common dietary supplements used for reducing cholesterol.

Sytrinol vs. Other Natural Supplements
Most nutritional solutions to the cholesterol problem are impacted by a major flaw: they are minimally effective and do not produce a big enough change in enough people to significantly impact health. When compared with results from numerous trials indicating the effectiveness of nutritional supplements on heart health, Sytrinol comes out with more positive results.

Softgels - An Enhanced Bioavailability Delivery System
A small clinical trial was conducted to determine if a specific delivery system would impact the bioavailability of Sytrinol. The results were surprising, yet insightful, in that soft gelatin capsules exhibited significantly improved bioavailability of the principal actives in Sytrinol .

Springfield Nutraceuticals only launch products with robust research behind them, so are very pleased to bring new Sytrinol GT to the UK.
Sytrinol GT 150 mg 60 softgels RRP £ 29.95
from www.natural-alternative-products.co.uk and www.nutricentre.com

STUDY THREE
This study was a large (120 patient) double-blind, crossover randomized study. In Phase I, one group of patients received a placebo, while the treatment group received 300 mg of Sytrinol per
day for 12 weeks (150 mg a.m., 150 mg p.m.). Blood samples were drawn at baseline, 4, 8, and 12 weeks and measurements were taken on total cholesterol, LDL-C, total triglycerides, HDL-C, and LDL to HDL ratio. This trial provided very favorable results: after a 12-week period, upon comparison with the placebo group, total cholesterol for the treatment group had plummeted 27%, LDL-cholesterol was diminished by 25%, total triglycerides were reduced by 31%, and the LDL to HDL ratio shrunk by 28%. Even more significant is the fact that HDL (good) cholesterol levels increased by 4% over those of the placebo group.

NUTRITION RESEARCH STUDY DETAILS
Orange juice consumption was reported to decrease low-density lipoprotein cholesterol (LDL) in the hypercholesterolemic group, but not in the normolipidemic group. However, HDL-cholesterol and triglycerides were observed to remain unchanged in both groups.

For the hypercholesterolemic group, free cholesterol transfer increased by 22 per cent; whereas the phospholipid transfer decreased 10 per cent and triglyceride transfer reduced by 23 per cent after orange juice consumption.