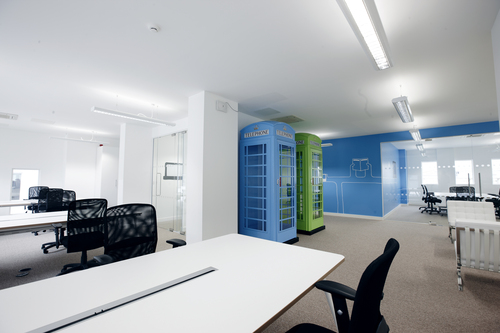 23 May 2011 - The UK’s first flexible workspace with on-site childcare has proven such a hit with parents that the company is looking to expand. Celebrating its first year in business on 26 May, Third Door in Wandsworth is now on the hunt for a second location to be opened in 2012, with the areas of Tooting/ Balham and Chiswick/Ealing hot favourites.

Third Door gives parents the perfect solution: a place to work uninterrupted in an open-plan office while their children are taken care of in an OFSTED registered nursery downstairs, as and when they need it. The company now has over 100 members, a quarter of whom use the space between 30 and 90 hours a month, with the remainder using it on a pay-as-you-go basis.

Founder of Third Door and mum of two Shazia Mustafa explains: “Many of our members sign up thinking they’ll just use us for occasional extra cover. But they quickly realise that it gives them far more benefits than they anticipated and so switch to using us as their primary place of work and childcare.”

Some of the key benefits cited by members are flexibility, social interaction and networking.

“I never realised just how lonely it was working at home on my own,” says Emma Insley of Insley Consulting, one of the first Third Door members. “Coming to Third Door is like being a part of team with the chance to have a gossip and catch up with work colleagues. You get a cheery smile and the chance to socialise with other people, rather than just staring at four walls.”

For Rosie Nottage, a garden designer, it’s all about having a solution that fits in with her seasonal job. “It’s the flexibility that we love about Third Door. A regular nursery just doesn’t allow for changes in hours or days and has none of the convenience of being able to work in the same building that your child is being taken care of. Third Door has given me the freedom to work the way I want to work and still ensure that our little girl is taken care of,” she says.

When it launched in 2010, Third Door was the only space of its kind in the UK. Setting up a new business in a recession with a brand new, unproven business model was always going to be a challenge. But as Shazia explains, hard work and a commitment to the need for a space like Third Door have been the driving factors behind the company’s success.

“Setting up Third Door has been a massive learning curve. It’s not as simple as a regular nursery model and in a tough economic climate, it has been a huge amount of work. But we now have a fantastic team in place, all the systems are operating smoothly and we’re learning continuously about what our customers need. We’re confident that it’s a model that works and we’re ready to expand. Parents need this new way of working and we’re committed to giving it to them,” she says.

Membership to Third Door costs £50 with various packages available depending on the hours required. The space can be booked as little as 24 hours in advance and can be used as combined work space and childcare or just one or the other. The space also has meeting rooms for hire and holds regular networking events on a range of subjects. To find out more go to www.third-door.com

Third Door is a flexible workspace with OFSTED registered childcare, operated on a flexible basis. It is run by husband and wife team Yusuf Chadun and Shazia Mustafa and is based in Wandsworth, South West London. It opened in May 2010.

The bright, airy, modern space is divided into two levels. The downstairs has the OFSTED registered nursery able to take up to 24 children aged 0 – 8. All the staff are highly qualified and ensure that the EYFS curriculum is followed. There is also a communal ‘time out space’ where parents can have lunch with their child or chat to other parents who live in the area. Upstairs is the large flexible ‘work space’. It consists of open plan hot desks, two small meeting rooms and one large meeting room, plus a lounge area, kitchen and two telephone booths for making private calls. The entire space is wi-fi enabled, has an intranet portal for members and printing facilities are available too.

Besides offering workspace and childcare, Third Door offers regular events, training and networking opportunities for parents in business. The company won the Lloyds TSB/Heart FM Local Business competition in 2010 and Best Start Up Business Award 2010 at the BusinessMums Conference 2010. In addition, Shazia was a finalist in the Mum and Working Awards 2010 and The Mumpreneur Awards 2010.