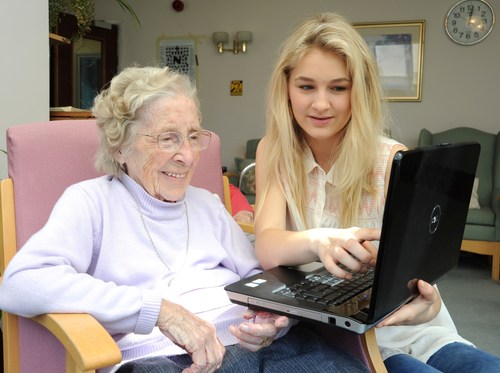 Actor Geoffrey Palmer OBE, is launching a national initiative to bring young and older people together. Palmer is championing a generational skills swap initiative - the AGEnda Skills Swaps – that will take place during Abbeyfield Week (10-19 June).

This initiative follows new research from the charity Abbeyfield, providers of sheltered accommodation for the elderly, which shows a huge understanding gap between the younger and older generations.

Across the UK fifty per cent of over 65 year olds think young people lack family values, morals, a sense of responsibility and community spirit and are obsessed with celebrities and becoming famous.

The views of young people on the older generation are just as bad – many said they have outdated views, attitudes and behaviours and do not respect young people and their views.

Palmer explained: “I’m launching Abbeyfield’s AGEnda Skills Swaps to raise awareness of the need for younger and older people to spend more time together. On overage the two generations spend only 12 days a year together.

"The skills swaps will demonstrate to the different age groups that their negative ideas are far from the truth. The swaps, which will range from cooking to social networking, will help to build bridges between the generations as they learn from each other.

"I’m also inviting people to arrange their own skills swaps and share their plans and experiences online with Abbeyfield.”

The research generated a Top Ten AGEnda Skills Swaps list which shows what younger and older people are keen to lean from each other:

1. Shadow each other to learn about the other's lifestyle (young
and older people) - eg spend a day at a school, college
or university / spend a day at an Abbeyfield residence

3. Learn traditional crafts such as knitting and sewing (young
people)

6. Learn how to DIY (young people)

7. Learn how to write a great letter (young people)


The AGEnda Skills Swaps will be based around many of these ideas.

Paul Allen, chief executive of Abbeyfield said: “If the two generations don’t have much contact with each other it’s understandable why they make assumptions which may not always be correct. Abbeyfield Week is our annual celebration illustrating all that is great about the different generations. Our theme this year is a AGEnda Generational Skills Swaps hosted at our houses. The event will enable our residents to have a fun day interacting with young people to swap skills unknown to each other.”

The AGEnda Skills Swaps will take place at Abbeyfield residences throughout the UK between 10 and 19 June 2011. To learn more about the campaign visit http://www.abbeyfieldweek.co.uk/generation-skills-swap/

Over 65s: Over-all more than one in ten adults aged 65 or over said they had a negative opinion of young people today. Half of those polled think young people have lost family values and 46% said young people lack morals - negative perceptions exist around anti-social behaviour including binge drinking and swearing. Fifty-three per cent said they have no sense of responsibility or community spirit. Nearly 60% said youngsters have lost all value for money and are preoccupied with celebrity culture and craving fame. More than half (55%) think young people have no social skills and 47% feel that the youth of today have lost their innocence. Respect is a big issue - just 18% of the over 65s feel younger people respect their elders. On a practical level 46% said they dislike the fact that youngsters have poor writing skills and 40% branded them lazy.

OLD AND YOUNG DON'T MIX ENOUGH: It is not surprising that there is such misunderstanding among the age groups - they spend very little time one-to-one together; each year the average is just 12 days out of 365. This applies to 30% of 18-30 year olds and 41% of 10-17 years. The remainder said they don’t spend any one-to-one time with older people. On the most recent occasion when the generations spent time together, they watched TV (10-17 year olds) or had a natter (18-30) over a cup of tea.

THE GOOD NEWS: Nearly 70% of 18-30 year olds admire the life experience of older people and over a third (35.2%) said they liked the fact that older people are willing to share their knowledge and wisdom. For the 10-17 year olds, these figures were 43% and 35% respectively.

Seventy per cent of the over 65s said they admire young people’s ability to embrace new technology and 29% said they like their ‘get up and go’ attitude to life. Both age groups agree they can learn from each other. Eighty-two per cent of the 10-17 year olds said that older people have things to teach them, with only one in twenty disagreeing. In the 18-30 age group, over 76% agree they have things to learn from the older generation. And 66% of the older age group said the younger generation can teach them new things.

The research was conducted by OnePoll.com among 1000 respondents aged between 10 and over 65 throughout the UK.