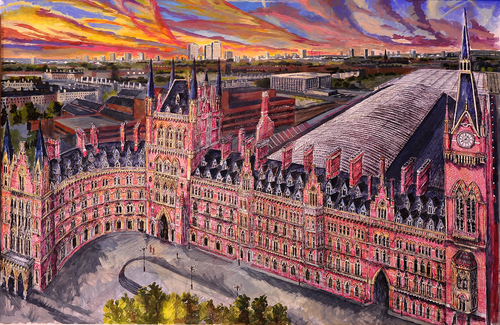 - This artwork has now earned £10,000 for the National Autistic Society through the Anderson Foundation auction
- Commissioned by The National Autistic Society (NAS), this astonishing work is by an artist with Asperger syndrome and high-functioning autism was auctioned in aid of the NAS, both by public online bidding and at the Anderson Foundation Summer Ball, at St. Pancras Renaissance Hotel, July 9th

David Downes is an artist with a distinctive and extraordinary talent. Not only highly technically skilled, David also has a ‘visionary’ gift – he is able to look from ground level at a city scape and mentally visualise the view from the rooftops with mind-boggling architectural accuracy. But it’s not just the perspective he gets so remarkably right and is able to translate to the canvas by working from memory, it’s the mood, the ambience, the character of the location.

A long time London resident and graduate of the Royal College of Art, David has an instinctive connection to the city – and its skylines are one of his favourite subjects. The St. Pancras pen-painting is not only the first artwork to capture the recently renovated landmark, it’s one of the most moving expressions of this beloved building within its setting.

David, who is represented by art business GoFigurative.com, was commissioned to create the image for the Anderson Foundation Summer Ball in aid of The National Autistic Society, which will be held at the newly opened St. Pancras Renaissance Hotel. David, through his own understanding of Asperger syndrome, was particularly inspired to work in support of the NAS. Choosing to create the image in a very particular medium, David was sponsored for this piece by leading stationery supplier BIC and the drawing is mainly rendered using the BiC® Cristal® (which celebrates its 60th anniversary this year) to magnificent effect.

The historic, red-brick building was originally designed and built by foremost Victorian architect, Sir George Gilbert Scott, opening as the Midland Grand Hotel in 1873. Its Victorian Gothic splendours have recently been revived with a £200 million pound restoration with the building now comprising 67 private, residential apartments on the upper floors of the building and a luxurious new 245 bedroom hotel, the St Pancras Renaissance Hotel, on the lower floors. The opening of the hotel also marks the completion of the regeneration of St Pancras International Station, now the home of Eurostar.

David was delighted by the commission and the process for several reasons: “As an artist with Asperger syndrome and high-functioning autism, I have been involved with The National Autistic Society for many years and when they commissioned me to draw the St. Pancras Renaissance for the Anderson Foundation Summer Ball, I was inspired and excited, as having the resources available to draw this magnificent building has long been a dream of mine. Seeing my drawing develop has been very fulfilling, and by using a BiC® Cristal®, I am able to create the effect I want to achieve. I have been using BIC pens for a long time in my drawings, and so I am very proud that BIC has been generous enough to sponsor this piece. Working in ball point pen is challenging as it can’t be erased, but also good fun as they help to create a continuous flow when drawing.”

The picture, which is 100cm x 145cm and framed with UV glass to prevent light damage, was unveiled during a private reception for the artist on July 7th at international law firm Wragge & Co’s London office (Waterhouse Square, Holborn), and then auctioned at The Anderson Foundation Summer Ball at The St Pancras Renaissance Hotel on 9th July in aid of The National Autistic Society. Founder of The Anderson Foundation.

Delighted, once again to be raising much needed funds for the National Autistic Society in 2011, Mark Anderson said: "This is the third fundraiser that the Anderson Foundation has hosted on behalf of the National Autistic Society and we are thrilled that David has given his time and expertise to produce this outstanding piece of art for us to auction. The dedication and enthusiasm of the entire team at the NAS is clearly apparent and we know that every penny of the funds raised will be put to good use by the charity"

The artwork will be available to view by the interested public, by appointment only, from June 17th to July 8th, during office hours at, 1 Liverpool Street, London EC2M 7DQ.
Contact David Downes’ agent: sallyperry@gofigurative.com T: 0207 956 2819

Sally Perry of GoFigurative.com, a unique art business working with technically skilled artists – with particular focus on portraits and landscapes – is delighted to be involved with the project and to see David begin to gain some much deserved recognition: “I met David only recently and leapt at the chance to represent him. His work and his intellect are an inspiration to everyone, especially to those whose lives are affected by autism. David wants everyone to recognise the invaluable service that The National Autistic Society provides and humbly presents his painting of the St Pancras Renaissance Hotel to be auctioned at the Anderson Foundation Summer Ball to raise money for the charity.”

Mark Lever, CEO of the National Autistic Society said: "We are really proud to be the beneficiary of the Anderson Foundation and the money raised from the Anderson Foundation Summer Ball and the auction lots will be going towards providing vital support and services to the half a million people in the UK with autism. Autism is a lifelong developmental disability and without the right support it can have a profound and sometimes devastating effect on individuals and families. We are very grateful to David Downes for providing this outstanding piece of art for the auction lot. David's involvement with The NAS over the years has helped raise awareness and vital funds for the charity, and we are very excited to see his work of art in the auction this year.”

Yolande de Trogoff, BIC UK and Ireland - Marketing Manager said: “As charity partner of the NAS, and sponsor of this amazing piece, we are delighted to support David’s work. The BIC® Cristal® is an iconic pen which celebrates its 60th anniversary this year, and what better way to mark this landmark occasion than with an incredible piece of art – of one of London’s landmarks. We hope it will raise valuable funds for the National Autistic Society.”

Artist, David Downes, who has Asperger syndrome and high-functioning autism, completed an MA at the Royal College of Art in Communication Design in 1996 and has since worked on a range of projects, from landscapes and drawings to a major commission for the BBC. In September 1999 he set out to record the BBC’s most important architecture at the turn of the century. In June 2000 he became Artist in-residence to BBC Heritage.

In 2000, Downes’ life and career were the subject of a book written by Shelia Paine titled ‘Artists Emerging’ which explores the mysteries of drawing fluency through the work of seven artists. Downes lives and works in London and is available for architectural drawings and paintings and landscapes.

Downes says that as a child he could communicate through drawing before he could speak properly. He could draw in perspective and appeared in Six Children Draw in 1976 and in the book, Artists Emerging by the late Sheila Paine.

He says “My work focuses on the juxtaposition of history and modernity in London. Graveyards lie next to modern offices, ageing churches stand in built up areas. I often paint my scenes of London from an aerial position, imagining the way the landscape would look when viewed from that angle. In this way my work is a meeting of realism and imagination. I am very focussed and can capture architecture and urban-scapes in vivid detail.”

Further examples of David’s artwork are available to view by the interested public, by appointment only, during office hours at, 1 Liverpool Street, London EC2M 7DQ.