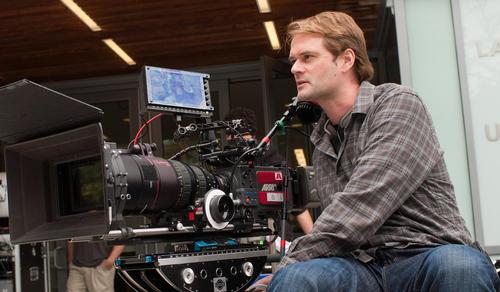 Hollywood film director Tom Vaughan has pledged his support for the creation of an arts & entertainment centre in his former hometown of Helensburgh on Scotland’s west coast.

Vaughan, who has recently completed directing Miley Cyrus in forthcoming action comedy “So Undercover”, grew up in Helensburgh and says the plan to create the centre is a ‘wonderful idea’ for the town that inspired him to become a film director.

Vaughan said: “Helensburgh is where I saw my first movies and made my first attempts at film making. I went from watching Harrison Ford in the original ‘Star Wars’ at the old La Scala cinema to directing him in my own film many years later. It’s a long journey but one that started in Helensburgh and I’m sure that this centre, which I wholeheartedly support, will provide similar inspiration for the young people of the town.”

“Speaking both as a film director and a filmgoer there is no better way to see a movie than with an audience and on the big screen. Seeing films in Helensburgh inspired me to pursue a career as a director and it was a terrible shame when La Scala closed down in 1984.”

The Helensburgh Heroes Charity has recently received planning permission to convert a former Victorian Warehouse in the town into a three storey Arts and Entertainment Centre, complete with two digital auditoriums, a 50s style diner and arts space.

The charity also hopes to establish a ‘Helensburgh Heroes Hall of Fame', with memorabilia and displays to celebrate the lives of the local men and women who have made significant contributions to society in their chosen fields. Over 100 inductees have been identified to date, including ‘Father of Television’ John Logie Baird, movie stars Deborah Kerr and Jack Buchanan, authors WH Auden and AJ Cronin and members of the Glasgow Boys and Girls Arts movement.

The charity hopes that by telling the stories of these ‘Heroes’, young people from the town and visitors to the centre will be inspired to emulate their achievements.

It is a sentiment that is echoed by Tom Vaughan. He added: “I remember seeing a model of John Logie Baird’s early TV set in the local library and it made me think that you can come from a small town like Helensburgh and go out into the world and do whatever you want.”

Phil Worms, Director of the Helensburgh Heroes charity, said: “We are delighted that Tom has taken the time out from his hectic production schedule to offer us his support. He absolutely epitomises what this arts and entertainment centre will be about. He is living his dream and we hope that the Heroes Centre will allow many other young people in the town to pursue theirs.”

Worms added: “The West Coast of Scotland boasts an incredibly rich and diverse heritage, and one of which we should be rightly proud, and we hope that companies and individuals will step forward and help us celebrate the achievements of these inspirational men and woman, by supporting the Centre’s fund raising efforts.”

Helensburgh Heroes is a young but hugely ambitious charity. It was formed in 2008 by local people with the specific intent of procuring, delivering and managing leisure and arts facilities that will educate, inform and above all inspire. The Charity is named in honour of the many men and women with connections to the Helensburgh Area who have made significant contributions to society through their physical, cultural, emotional, intellectual and spiritual aspects.

The Charity is currently in the process of converting an old Helensburgh Victorian Warehouse into an Arts & Entertainment complex – the Heroes Centre – which will contain two digital auditoriums, a 50s style diner, arts space and a Helensburgh Hall of Fame. It is planned to open in late 2012.
Helensburgh Heroes is a registered charity in Scotland: SC040114

Film director Tom Vaughan was born in Glasgow in 1969. He spent his formative years in the west coast town of Helensburgh. After leaving Helensburgh’s Hermitage Academy and graduating from Bristol University, Tom quickly made a name for himself directing commercials and UK TV shows, including the hit series Cold Feet.

His latest film, ‘So Undercover’ sees Miley Cyrus play a street-smart private investigator hired by the FBI to infiltrate a college sorority and befriend the daughter of a mobster. It is set for an October 2011 release.