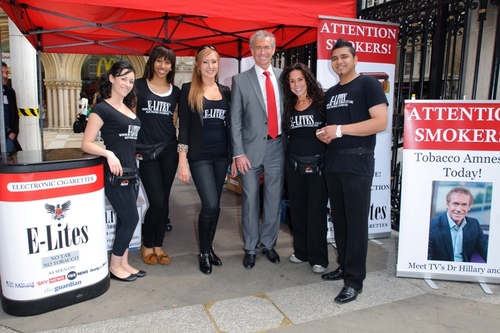 This Friday (1st July) marks the fourth anniversary of the UK smoking ban. But in 2007, few of us could have foreseen that by 2011 people would be switching to electronic cigarettes for the freedom to smoke almost anywhere.

Leading UK brand E-Lites have seen a steep rise in sales during 2011, with 20% month-on-month growth since January. The growth of the electronic cigarettes market as a whole has been estimated at 500% from 2010 to 2011.

E-Lites have the advantage of being significantly cheaper and healthier than conventional cigarettes, but it is the fact they are unrestricted for use in public places that is often cited as a key factor by those who make the switch.

With pubs across the UK closing at a rate of about 25 per week and the smoking ban regularly cited as one of the key causes, many landlords have taken the step of selling e-cigarettes to keep smokers coming through the door.

One of them is Reg Pearson, Landlord of The Robin Hood pub in Clifton Reynes, Buckinghamshire. He said: “I came across E-Lites and was struck by the novelty factor at first, but they have become a big hit among several of our regulars. It means they can sit in the bar and enjoy a smoke while drinking, without being forced outside in all weathers. The other important thing is that they don’t upset other customers, because they just produce a harmless vapour that doesn’t smell. Pubs have always had to adapt to change and I think this is one of the ways that we can move forward.”

E-cigarettes are a fast-growing trend. In the UK alone, there are now over 900,000 individual Google searches for ‘electronic cigarettes’ each month. Internationally, stars such as Johnny Depp, Katherine Heigl and Leonardo Di Caprio have all been spotted with e-cigarettes.

E-Lites replicate the experience of smoking with a realistic-looking device that turns a pure nicotine solution into a vapour that is inhaled like a cigarette.

E-Lites director Dermot Ryan said: “The growing popularity of E-Lites has been quite phenomenal over the past few months. I think more and more smokers are recognising this product as a genuine, credible and enjoyable alternative to normal cigarettes. In many ways, the smoking ban has really sidelined smokers but with a product like E-Lites they can enjoy the same experience without feeling uncomfortable.”

For more information go to www.e-lites.co.uk

E-Lites (www.e-lites.co.uk) was established in the UK in 2007 and is already a leader in its field, producing some of the most advanced electronic cigarettes on the market. The company is expanding nationally and internationally as demand grows for its innovative products.

Its latest range of new-generation E-Lites includes the disposable device that provides the equivalent of 40 cigarettes and is priced at £9.99.