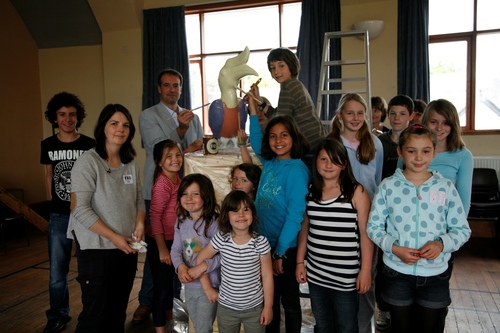 Web hosting and domain name company Easyspace has announced its participation in Jungle City 2011 – a charitable art extravaganza that will see the city of Edinburgh transformed into an urban jungle this summer.

Jungle City 2011 is the latest art fundraiser by the hosting company’s favourite charity the Elephant Family and sees Easyspace again running its Domain Names for a Domain campaign, donating 5 pence from each domain name sale to help save the habitat of endangered animals.

Sarah Haran, managing director of Easyspace , said: “We have been supporting the Elephant Family charity in its efforts to highlight the plight of the Asian elephant and other threatened species for the past two years. We hope our Domain names campaign once again encourages our customers’ to dig deep.”

Easyspace is sponsoring two of the 150 life-sized sculptures of endangered animals that are being created for Jungle City 2011 which hits the streets of the Scottish capital during August and September.

Easyspace has recruited a group of schoolchildren from a community art project called Friends of Art Balfron in central Scotland to help create their sculpture of an exotic hornbill bird. The children’s work will sit alongside that of famous artists like Jack Vettriano and celebrities like former Spice Girl Geri Halliwell who have been recruited to decorated sculptures of hornbills, tigers, crocodiles and orang-utangs.
Phil Worms, marketing director of iomart Group, parent company of Easyspace, added: “We’re absolutely delighted that the children of Balfron are designing and painting our hornbill for Jungle City. They’ve amazed us with their ideas and we can’t wait to see the end result on display in Edinburgh.”

FAB chairperson Dawn Cullen, said: “This is a really wonderful art project for the children to be involved in. We can’t thank Easyspace and the Elephant Family charity enough for inviting us to take part. We hope our involvement encourages a lot of other community groups to take part.”

Last year Easyspace, with the help from students of Glasgow Metropolitan College, produced one of only two Scottish designed elephant sculptures as part of the Elephant Parade, the Elephant Family’s first public art event in London.

Phil Worms added: “Having experienced the wonder of the London event, the opportunity to bring street art to the capital city of Scotland was too good an opportunity to miss.”

Easyspace is a subsidiary of iomart Group plc which was named Scottish Digital IT company of the Year 2011 and is ranked as one of the top 25 cloud services providers in the world by Talkin’ Cloud 50.

Friends of Art Balfron is a not-for-profit organisation set up to promote the visual arts in the Balfron area. It runs Saturday morning art workshops for children under the title ‘Balfron ArtWorks’ and delivers regular free community drop-in events to encourage participation in art and craft activities.

The Elephant Family charity has so far raised more than £4 million from its public art projects to help preserve the habitat of the Asian elephant and other endangered species. It spends the money raised on purchasing land to be set aside as natural reserves for the animals. Its first fund-raising public art event was the Elephant Parade in London in 2010 which put 260 beautifully decorated life-sized elephants on display around the UK’s capital city.

About Easyspace
Founded in 1997, Easyspace has gained a reputation for offering high quality and innovative products backed by excellent customer service. Easyspace has grown to become the UK’s largest ICANN accredited domain name registrar and one of the largest web hosting companies in the country. The company now serves over 350,000 consumer and SOHO customers with an extensive portfolio of hosting and ecommerce solutions, ranging from dedicated servers through to professional web design.Easyspace is a subsidiary of AIM Listed iomart Group plc.


About iomart Group plc:
iomart Group plc (AIM:IOM) is one of the UK’s leading providers of managed hosting and cloud computing services. From a single server through to private cloud networks, iomart specialises in the delivery and management of mission-critical hosting services, enabling customers to reduce the costs, complexity and risks associated with maintaining their own web and online applications.

iomart Group operates in its chosen markets through a number of subsidiaries: iomart Hosting, RapidSwitch, Titan Internet, Easyspace and Westcoastcloud. The group has been listed on the London Stock Exchange's Alternative Investment Market (AIM) since April 2000.