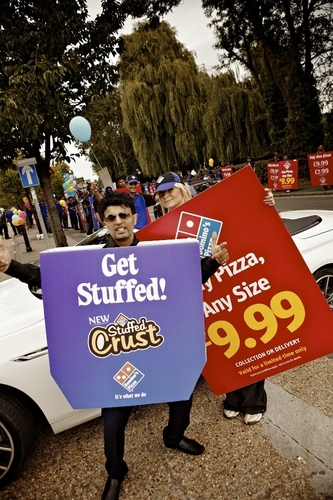 August 2, 2011 - Domino’s Pizza in Loughton has recently changed ownership. With new franchisees Ajaz Mirza and Amir Zarinabad on board, the store celebrated in style on Friday to help spread the word about the latest tasty deals from Domino’s.

Amir originally joined Domino’s as a trainee manager and opened his first franchise in 1999. Ajaz took a part-time job as a driver while he was a student. By 2001, the two had joined forces and began running stores together. Today, they own 19 stores across London and Essex and employ 500 people. Loughton is the latest store in their pizza portfolio.

Ajaz Mirza, new co-franchisee of Domino’s Loughton store, said: “Having just taken over the store, we wanted to make sure the people of Loughton knew we had arrived, as well as helping to give our pizza sales a boost. Our colourful wobble boarders and the carnival atmosphere certainly helped us to do that. Wobble boarding is a key part of our marketing activity and we know that when the wobble boarders come to town, people will buy more pizza. It’s a great way to make sure that if anyone is in any doubt as to what to have for tea – pizza will be right at the front of their minds!”