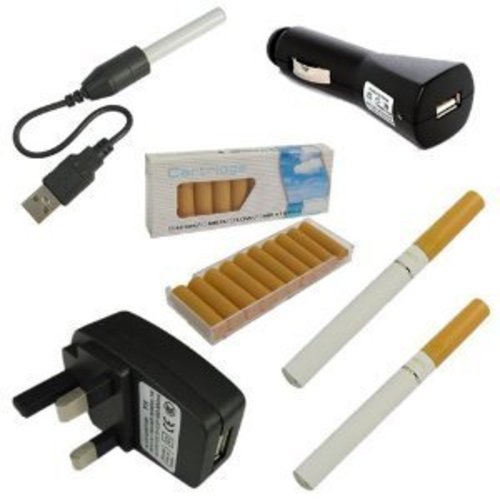 Jackie Castle smoked about 40 cigarettes a day for about 45 years, but when her son and daughter-in-law announced that they were to have a baby and that if she didn’t give up smoking she would not be able to hold the baby she knew that somehow she would have to give them up.

She tried patches, gum and eventually hypnotherapy but none of these worked, possibly because Jackie didn’t really want to stop smoking. Then she heard about electronic cigarettes.

So she ordered an electronic cigarette starter kit from an online company www.electronic-cigarettes-4u.co.uk and started using them instead of her regular cigarettes.

They looked and tasted similar to conventional cigarettes and could be bought in a variety of flavours and strengths to suit all tastes.

The main difference with the electronic cigarettes is that the nicotine liquid used is purified and contains no tar, or any of the 4000 or more other harmful substances that tobacco cigarettes contain. As they do not give off carbon monoxide smoke, but instead a fine vapour that disappears into the atmosphere in seconds, there are no secondary smoke problems that can cause illnesses for the people around you, and they can be smoked on airplanes, in shops, bars, restaurants, bingo and in all the other places that tobacco cigarettes are banned including public buildings. In addition there is no yellowing of teeth, smelly breath, hair or clothing, no brown fingers, room furnishings or car ceilings, no ashtrays full of dog ends and as there is no lighted end, no chance of burning down the house.

They work very simply, you have a battery that looks like the white part of a cigarette and is rechargeable and a cartridge that looks like a cigarette filter and contains purified nicotine known as e-liquid. In between these is an atomizer. When you puff on the cartridge the battery heats the atomizer which in turn heats the nicotine to give you the required "hit" and you breathe in and breathe out just nicotine vapour which vanishes almost instantly.

In addition to the health advantages there are also massive savings as a cartridge lasts for approximately 10 regular cigarettes so that a typical smoker that smokes a pack of 20 per day could save about 80%, enough to pay for an annual holiday for 4 or fill up your car’s tank every week for free.

It looks certain that the use of electronic cigarettes will grow as more countries stop people smoking tobacco products in public places.