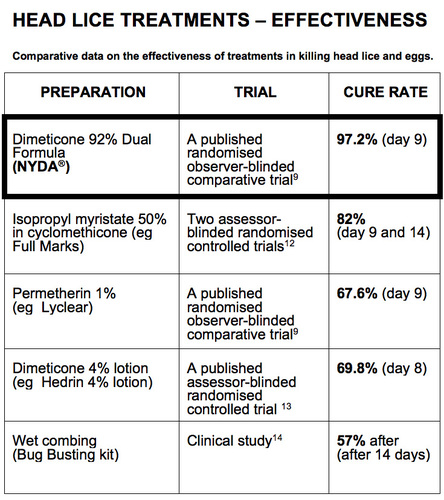 One third of parents (9.4 million in the UK) say they will keep their children from school to tackle head lice infestations – even though the government maintains that infestations should not prevent attendance at classes.

A new study of 1,000 parents with children under 16, carried out for head lice treatment NYDA®, found that 1.78 million children are missing a staggering 2.7 million days a year from school as parents choose to keep them at home. Meanwhile, parents are taking 2.78 million days off work to tackle head lice infestations 1.

These 2.78 million lost days from work are costing the nation £238 million in lost productivity. Added to that is £23 million 2, spent on over-the-counter and prescription head lice treatments every year.

A third of school children under 16 (4.06 million), have experienced on average 3.6 head lice infestations over the last year. This rises to 48% for children of primary school age (4 to 11), before dropping to 32% with 12 to 15 year-olds and 20% with under-four's. 16% of British parents surveyed (4 million) even said they had caught lice from their own children.

Just why are parents failing in their costly attempts to eradicate head lice?
The counting the cost of head lice report, commissioned by head lice treatment NYDA® 92% Dimeticone Dual Formula – an innovative treatment clinically proven to kill head lice within one minute 3 and their eggs within 8 hours 4,5,*, found that many parents failed to check their offspring’s heads regularly for head lice, just 35% of parents said they check once a week, rising to 50% for parents of children aged four to seven, and 9% check once a month. A further 12% say they only check when they notice the child scratching its head, and 6% need the motivation of a school letter with a lice warning.

Nearly a third of parents, 29% used of parents used a chemical treatment, of which a high percentage of lice – up to 80% in certain cases – are resistant to long-established chemical treatments based on neuro-toxic insecticides 6. Many parents seem to remain unaware that this is the case -- or that a treatment like NYDA® does not encounter resistance, since it works by suffocating the lice rather than poisoning them.

Finally, manufactures and healthcare professionals are failing to take note of and communicate to parents the Department of Health’s recommendations on eradicating lice. The British National Formulary, used by health professionals, states explicitly that “a contact time of 8–12 hours or overnight treatment is recommended for lotions and liquids 7”, but many branded treatments – though not NYDA® – claim to be able to clear head lice in 30, 20 or even just 15 minutes. In practice, this is too short a time to kill louse eggs, which are more stubborn to treat. Indeed, some treatments are unlikely to be able to kill the eggs at all. In these circumstances, a second application after seven to nine days becomes essential to kill newly hatched nymphs (larvae) and thus break the lifecycle before the nymphs reach maturity and in turn start reproducing. (During its 50-day lifespan, a female louse can lay up to 300 eggs.)

“Although head lice are not considered a major health hazard, infestations can have a physical and psychological impact on children and their families. The results of this new survey make clear that, because head lice infestations are a common occurrence, health professionals and pharmacists need to provide clear information and guidance to parents on the methods of detection and treatment. This should be based on the guidelines from the Department of Health (BNF) which will enable parents to choose the most effective treatments for their child.”

The Department of Health’s recommendations on treatment for head lice:
"Head lice infestation (pediculosis) should be treated using lotion or liquid formulations only if live lice are present. Shampoos are diluted too much in use to be effective. A contact time of 8–12 hours or overnight treatment is recommended for lotions and liquids; a 2-hour treatment is not sufficient to kill eggs. In general, a course of treatment for head lice should be 2 applications of product 7 days apart to kill lice emerging from any eggs that survive the first application 7."

Which products are parents using in their attempts to eradicate lice?

36% of parents surveyed had treated their children on average 7.13 times in the last three years, yet only 39% reported treatment success in eradicating head lice:

• 29% of those parents had used a chemical treatment containing an insecticide with neurotoxic action. Not only are these treatments ineffective against eggs younger than four days, but in up to 80% of cases, lice are resistant to the insecticides they contain 2.
• 38% of parents had used a treatment that works physically. These lotions contain dimeticone (like NYDA®) or cyclomethicone and work by coating the lice and killing them through suffocation or disrupting their water balance.
• 34% had used mechanical combs (wet combing or 'bug-busting'), employing a head lice comb and hair conditioner to remove the head lice and their eggs manually over several sessions
• 13% had used natural treatments containing herbal oils e.g. coconut oil. (There is no clinical evidence of efficacy for these measures.)

For further information, please contact Penny Lukats on 07775 992350 or penny@lukats.com

About NYDA®
Already the No 1 brand in Germany 8, and now available in 12 countries across Europe including the UK, NYDA® – with its 92% Dimeticone Dual Formula – is clinically proven to kill head lice within one minute 3 and to kill their eggs within 8 hours 4,5,*.

NYDA® is NHS-approved, which means it can be prescribed FREE of charge to children under 16 in the UK by the family GP, practice nurse**, healthcare visitor** or prescribing pharmacist**. In Scotland, NYDA® is also available FREE to children under 16 on the Scottish Minor Ailments Scheme.

**For those practitioners who have completed their training.

The lotion is based on a special dual formula of 92% dimeticone and works by suffocating head lice, larvae and their eggs. (Dimeticone is a form of silicone so safe that it is used for treating colic in babies, and it also moisturises and protects the skin.)

NYDA®'s efficacy in killing both lice and their eggs means that it breaks the louse lifecycle. In fact, a large-scale clinical trial 9 and laboratory (ex vivo, in vitro) studies, have proven that NYDA® kills lice, nymphs and eggs at all stages of their development 10,3. Since it kills by physical, rather than neurotoxic-acting means 11, head lice cannot develop resistance to NYDA® as they can to neurotoxic-acting insecticides 6.

NYDA® is available on prescription or it can be purchased from community pharmacies nationwide including Superdrug in-store pharmacies, Numark and online through www.nyda.co.uk.

NYDA® is available in two sizes

1. Identify the presence of head lice using the special NYDA® detection comb.
2. Use the pump spray supplied to apply NYDA® over the child’s entire head of hair.
3. After 30 minutes, use the special NYDA® comb to remove the dead lice. Then, leave non-greasy NYDA® in the child’s hair for 8 hours (overnight is ideal) to ensure that stubborn eggs (nits) are also dead.
4. Afterwards, comb and wash the hair with usual shampoo.
5. After 9 days, check for head lice; re-apply if required.

The NYDA® Head Lice Study was conducted using Ipsos MORI’s face-to-face omnibus survey, Capibus between 3rd and 14th July 2011. 999 interviews were conducted face-to-face in home amongst a national representative sample of Parents of children aged 0-15. The data presented are weighted to reflect the national profile.

How the cost of head lice was calculated

It has been calculated that every one day lost due to sick leave costs the nation £85.71 in lost business opportunities, reduced levels of service and output, wasted salary payments and overtime money to replacement staff.
How the number of school days lost by children was calculated
According to the Office of National Statistics Mid Year Estimate 2010 there are 11,271,700 million children under the age of 16. Of the 36% of children (4,057,812) who have been treated for lice 44% (1,785,437) had missed on average 1.54 days per year from school. This equates to children losing 2,749,572 from school due to head lice infestations in the last 12 months.