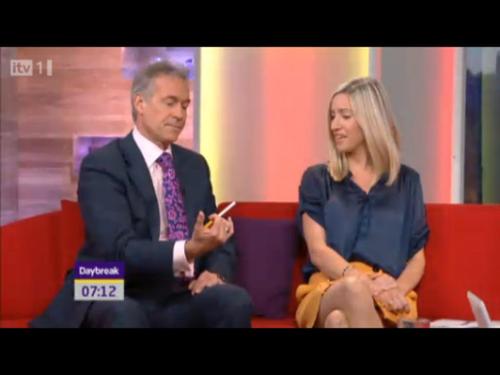 ITV’s Daybreak signalled a new dawn for smokers today as Dr Hillary Jones and fellow presenters discussed the benefits of stubbing out tobacco cigarettes in favour of healthier electronic cigarettes such as E-Lites.

They were commenting on the opening of a ‘Vaping Bar’ in Yorkshire where smokers can freely use electronic cigarettes, which is often nicknamed ‘vaping’ because the devices produce nicotine in the form of a vapour that can be inhaled.

Dr Hilary said: “Electronic cigarettes like E-Lites give you vaporised nicotine but no tar, so no carcinogenic lung cancer causing chemicals and no passive smoking element. People want to go to the pub and still indulge in smoking, and they can do so safely with electronic cigarettes.”

Presenters including Adrian Chiles, Christine Bleakley and Kate Garraway discussed the way in which electronic cigarettes contain only nicotine and therefore replicate the sensation of conventional cigarettes in far healthier way due to the absence of tar and tobacco.

Dr Hilary commented that E-Lites were similar to nicotine gums, patches and sprays in terms of helping satisfy the craving of smokers.

Following on from the news that a government policy unit is planning to encourage the use of such devices as a healthier alternative that could dramatically reduce the most damaging effects of smoking, the Daybreak discussion represents another step towards widespread acceptance of the devices.

Only last week, an article in the influential US-based Forbes magazine called for electronic cigarettes to be promoted, not banned. Calling for a review of international regulation, writer Tim Worstall said: “Surely people ingesting nicotine in a manner that doesn’t kill them is a good idea? Better than their continuing to get the drug from a method that may well kill them?”

E-Lites co-director Adrian Everett said: “Electronic cigarettes are becoming more popular every day The simple reason is that many millions of smokers want to continue smoking, but want to do so in a way that is healthier than tobacco cigarettes, as well as being cheaper and unrestricted for use almost anywhere in public.

“We welcome discussions like the one on Daybreak because it helps raise awareness that there is a credible alternative to tobacco cigarettes that people can enjoy. We fully expect E-Lites to become increasingly prevalent in the future.”

ELites was established in the UK in 2007 and is already a leader in its field, producing some of the most advanced electronic cigarettes on the market. The company is expanding nationally and internationally as demand grows for its innovative products.