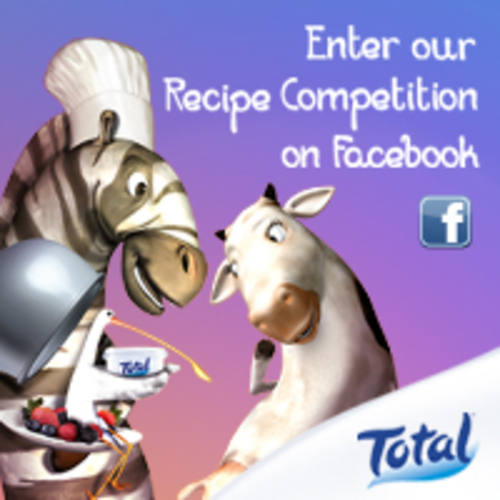 TOTAL Greek Yoghurt is launching a fantastic competition to find winning recipes for its new Healthy Eating eBook which will be sold on Amazon via Kindle in the New Year. All proceeds from the sale of the eBook will be donated to the Charity - Action for Children

TOTAL is asking entrants to create delicious recipes, perfect for those maintaining a healthy lifestyle. The eBook will publish these recipes alongside heart warming tales from the charity Action for Children.

The owner of the best recipe will receive an iPhone 4S and iPad 2 complete with smart cover. The runner up will win an iPad 2. There will be a further ten runners’ up prizes of TOTAL Greek Yoghurt goody packs, and all recipes which end up featuring in the eBook will receive a branded Yoghurt Cool Bag!

To enter the competition entrants are being asked to submit recipes via Facebook. All recipes must include TOTAL Greek yoghurt as an ingredient. The deadline for entries is the 20th January 2011.

Alison White from TOTAL Greek Yoghurt said; “Every week, we receive a number of emails from customers who have used TOTAL as a healthier substitute for cream, crème fraiche or mayonnaise. The recipes we sometimes receive are of a very high standard and so we thought an eBook would be a great way to showcase people’s passion for the product.

Through the competition, we’re hoping to receive a variety of tasty recipes - from nutritious snacks to wholesome family meals and healthy desserts. The eBook will be available to download on Amazon early 2012 as a Kindle eBook and all profits will be donated to the very worthy charity - Action for Children.”

By entering the competition, people will be in with a chance of seeing their name and recipe credited in the TOTAL Greek Yoghurt published e-cookbook, alongside the recipes of well known personalities!

Action for Children supports and speaks out for the UK's most vulnerable and neglected children and young people. One of the main signs of child neglect is children going hungry. The effects of hunger can be devastating, from daily pain and poor health to low educational achievement and bullying. Action for Children looks to combat this by early intervention. All of the proceeds from this project will be donated to the 'Take Your Action for Children' neglect campaign.