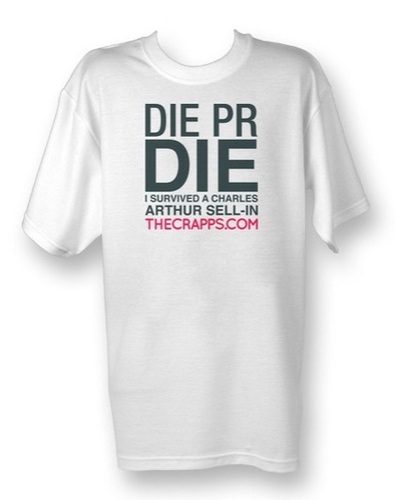 The Communicative Relations Awards from PR Professionals (The CRAPPs) are back for 2011, celebrating the special relationship between the media and public relations professionals once more.

To celebrate the relationship between journalists, bloggers and PRs, theCRAPPs.com, launched by 10 Yetis PR Agency in association with DWPub, is back.

In its inaugural year, more than 11,000 people nominated and voted for their favourites.

The awards, starting from the 15th November, are split into three steps:

The CRAPPs return with new categories, top-secret prizes for winners and giveaways, including an Amazon Kindle, details of which are on the homepage.

There will also be a weekly Twitter-only competition to win limited edition ‘Die PR Die – I survived a Charles Arthur sell-in’ t-shirts via the @thecrapps account.

There are eight personal award categories, and one group award.

Categories are as follows:

1. The journalist that makes you feel warm and furry on the inside (online and/or offline)
2. The ‘most likely to tell you to sling your hook’ award
3. Least twattish Twitterer – the must-follow journo (sponsored by A Social Media Agency)
4. Least twattish Twitterer – the must-follow PR (sponsored by A Social Media Agency)
5. Most approachable national newspaper
6. Journalist you'd most like to bring to the dark side (employ as a PR)
7. The ‘best PR blogger’ award

Nominators can tweet their nominations, and nominate as many times per category as they wish.

The ten most nominated names will be shortlisted for step two on Wednesday 1st December, where voters will get the chance to vote for their favourite per category.

“Last year, we aimed to bring PRs and journalists all over the UK together by having a laugh at the frosty relationship we famously share. I think we certainly went some way to doing that, but hope this year will be even bigger and better!

“It’s no secret that 2010’s ‘most likely to tell you to sling your hook’ winner Charles Arthur’s ‘Die, PR, Die’ blog post was the inspiration for The CRAPPs, so, we’ve come up with a special way to show him our appreciation. We hope he and others in the industry like it.”

Daryl Willcox, chairman of DWPub, www.dwpub.com, said of his company’s involvement in the awards,

"After the success of last year's awards we just had to get involved again. There aren't many opportunities for journalists and PR professionals to lay down their weapons and have a bit of a laugh so I couldn't help but ignore the advice of my legal team and put my full weight behind the CRAPPs."