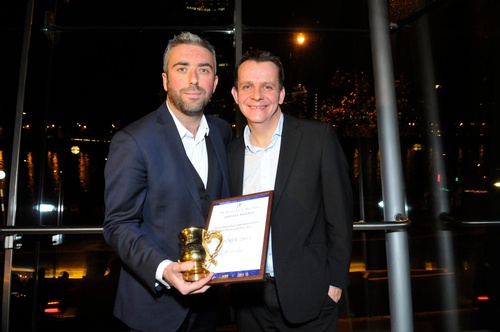 Ben is really setting the standard for writing about beer

Ben McFarland has been crowned Beer Writer of the Year at the British Guild of Beer Writers Annual Awards Dinner (1 December 2011).
The Beer Writer of the Year is chosen from one of seven category winners which seek to find the very best of beer writing and journalism in the UK. As well as picking up the overall title, McFarland also won the Fuller’s ESB Award for Best Writing for the Beer & Pub Trade.
Last year’s winner and chairman of the judges Simon Jenkins said: “Ben is really setting the standard for writing about beer. His work is always interesting and informative – and his passion for the subject really shines through everything he writes.”

Other winners named at the event at the London Riverside Park Plaza included Mark Dredge for beer and food writing, Martyn Cornell in the online category for his blog ‘Zythophile’ and Marverine Cole, for her regional television work.

Pete Brown scooped the new award for corporate communications, Des de Moor picked up the beer and travel writing prize, and Adrian Tierney-Jones was named national journalist of the year. The Guild’s Brewer of the Year was named as Kernel Brewery’s Evin O’Riordain

Judges this year were: Simon Jenkins, winner of the 2010 Beer Writer of the Year title; Fiona Matthias, executive editor of The Sunday Telegraph; Martin Ross, journalist, writer and home brewer; Martin Kellaway, founder of Wharfebank Brewery in Leeds and Joanna Copestick, who has commissioned and published a number of books about beer.

Simon Jenkins added: "The exciting thing for myself and my fellow judges was seeing the sheer range of material which is being published about beer – whether in books, newspapers, magazines, TV, radio and online."

"This reflects a fundamental change in Britain’s brewing industry, which has seen huge numbers of micro-brewers and craft brewers posing an increasing challenge to the dominance of the industry’s big boys. These brewers have brought hundreds of new beers to the market, and opened up to customers a vast new array of tastes, styles and experiences."

"These awards celebrate the very best in British beer writing. The scope, scale and variety of the work created by the winners is astonishing, and show that writing about our national drink is now being treated very seriously indeed."

On the Brewer of the Year Award given to Evin O’Riordain, British Guild of Beer Writers chairman Tim Hampson said: “Even though the Kernel brewery is not yet two years old, Evin O'Riordan and his team have created some of the most stunning beers in the country. If you're thinking about the London craft beer scene, just saying the phrase 'Craft Brewer' evokes images of this microbrewer working in his train arch brewery.

“The creative flair of O'Riordan with his passion for collaboration and generosity of spirit which has produced beers such as IPA Black, London Brick, Big Brick to name just three, speaks volumes about what is going on in the London craft beer scene and it's down to people like Evin.”

More than 230 journalists, brewers and pub operators attended the dinner at the London Riverside Park Plaza. The British Guild of Beer Writers was established in 1988 to help spread the word about beer and brewing and improve standards of beer writing in general. Today the Guild has more than 150 members – to find out more go to www.beerwriters.co.uk.