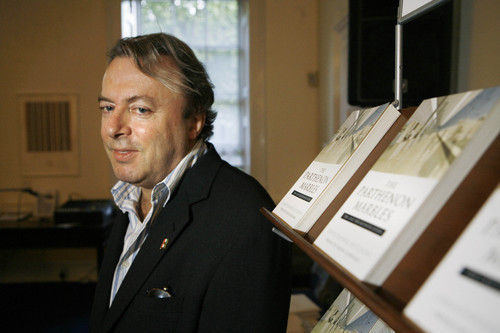 Christopher’s contribution and belief in our cause was a great strength to me personally and he will be sorely missed as one of our key supporters.

Tribute to the late Christopher Hitchens from the BCRPM

Eleni Cubitt, Honorary Secretary for the Committee said: “We are all deeply saddened by the news of Christopher’s death and we send our sincere condolences to his family at this time. Christopher’s contribution and belief in our cause was a great strength to me personally and he will be sorely missed as one of our key supporters.”

Christopher Hitchens is the author of ‘The Parthenon Marbles: The Case for Reunification’ and he attended the launched of the third edition of the book on 23 May 2008 at Chatham House in London. This edition is dedicated to James Cubitt, founder of the BCRPM and has a preface written by Nadine Gordimer.

Mr Hitchens felt the opening of the new Acropolis Museum provided the ideal opportunity to re-state the case for the return of the Elgin Marbles to Athens. When the new Acropolis Museum opened in June 2009, Christopher Hitchens visited and wrote an article, ‘The Lovely Stoes’ which was published in Vanity Fair (July 2009). His concluding sentence reads: ”And one day, surely, there will be an agreement to do the right thing by the world’s most “right” structure.”

Hitchens interest in the marbles began 25 years ago when he read an essay by Colin Macinnes, author of the 1950s novel Absolute Beginners, who had taken an interest in the Parthenon Marbles early on when no one else was really looking into why they were not returned to Greece. Hitchens, having heard nothing about them before, felt compelled to find out more.

He wrote his first article in 1983 on the subject in The Spectator and later went on to publish his book ‘The Parthenon Marbles: The Case for Reunification’ in 1987. In the book Hitchen insists the Greeks have a “natural right” to the sculptures, and that they belong on the hill of the Acropolis “in that light, in that air. Pentelic marble does not occur in the UK”.


The argument still hasn’t been won and the Parthenon Marbles still remain in the British Museum.

The BCRPM has asked its member’s, many of whom met with Christopher at the book launch, to send in their own tributes and thoughts, which will be put up on the web site in due course.